Secret Country's Ryan Gross on "7 Days A Week" and Drinking

As Secret Country prepares to mosey over to Kearny's Donegal Saloon to celebrate the release of  their new EP "7 Days A Week".  We dispatched our own Jordan McAliden to go straight to the horses mouth and find out what just what our favorite musical misfits were up to. Her's what guitarist Ryan Gross had to offer. James Damion

Jordan: How did a bunch of North Eastern drunks get turned on to Country Music? 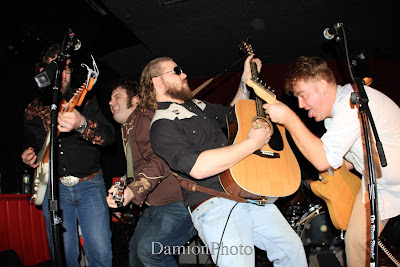 Ryan: We heard a Rascal Flats song and decided Country Music needed a kick in the ass.
Country music used to be incredible back in the Outlaw days when Country singers gained credibility from being in prison. We pretty much wanted to make Waylon Jennings proud… and we just like drinking…

Jordan: What is the origin of the name "Secret Country'?

Ryan: We never intended it to be a band. We would just play covers in Jay's backyard, and as you know, Newark, NJ is not a huge "Country" town. So we decided to call the band "Secret Country".

Jordan: "7 Days a Week" comes out on May 18th. How was the music making process for you guys?

Ryan: It's been a while since we've released anything, so it's always great to get in the studio, throw a few beers back and get creative.

Jordan: How does "7 Days a Week" differ from your previous drunken releases?

Ryan: It has less songs and is being released on a dead format.

Jordan: Are there any surprise guests on the record?

Ryan: Well, it marks the final performances of Eric and Yan with Secret Country.
It was great getting one last one in before their departure from the band.

Jordan: What led to the departure of
Eric "The Red" Munson?

Ryan: He wanted to focus on his solo "Coke Rap" album. I believe it's titled "Fire Crotch". 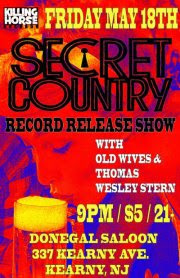 Jordan: Secret Country walks a fine line between paying tribute to its Country routes and completely magnifying it's glorious stereotypes. How do you find a middle ground?

Ryan: That's a fabulous question. Stereotypes are generally based on truths. So, singing about them might seem clique; but we're also singing about the subject matter. As long as it isn't hokey like Rascal Flats.

Ryan: The key has been infinite patience; And as far as we could tell, the horses liked it.

Jordan: We understand you have a full length on the horizon. Have you begun writing/drinking for it?

Ryan: Yes to both, it should be marginally good.

Jordan: What can one expect from May 18th's record release show?

Ryan: Drunken mayhem over the smell of burning incense.