Time for Something Else

This will most likely be the last post you see in a long time, if not ever.. While I hate to permanently close any doors, burn any bridges or exhaust any cliques. I haven't had the energy or interest in writing about music in a long time. My music blogging batteries are burnt out and after five years of consistently posting to United By Rocket Science. I no longer have the passion to go forward.

The departure of Dave and the fact that I became the only person who seems to contribute to another co-created, co-authored music blog have led me to think that any future endeavors would almost surely be both solo and less time consuming. Something that, at this point seems unlikely.

These five years years have taught me a lot about myself and my obsessive nature. How, whenever I take on any project. I develop this compulsive desire to make it bigger, better and to ultimately involve as many creative people as possible. While not a terribly bad thing. Putting that much passion or energy into anything can more than often result in burn out. One starts to expect too much from themselves and the people he/she chooses to involve.

In recent months and years my health has been a major cause of concern. Nothing I'd like to discuss in a public forum, but bad enough that I've told my doctors that I'm getting tired of fighting. And as much as they admire my resilience. I don't know how much longer I want to fight. Obviously, I needed to change some things in my life.

It all started slowly with a change of diet. My wife and I became vegetarians.  A stricter diet,  an exercise regiment and meditation followed. I began withdrawing from the rat race and rebuilding  my greatest passion, studio photography. I've been happier. And all I really want to be is happy. Over time, I've  learned that happiness often starts when you stop trying to make others happy. That's important, because United By Rocket Science stopped being fun for me and became more about setting deadlines and trying to please others. Something Dave and me never set out to do in the first place.

In the end, I'm very proud of what Dave G. and I created and built. Grateful for the many friends we made and the one's who contributed. Hopefully, the many people who stopped in to read the reviews and interviews, enjoyed the experience. But for now, it's time for something different.

P.S. I'll be covering two upcoming Jersey City music festivals in the coming weeks and months. Sugarfest August 12th and 13th at The Citizen and The North Jersey Indie Rock Festival Saturday September 12th at Cathedral Hall. I'll be taking lots of pictures at both events and will most likely be posting some of them here. 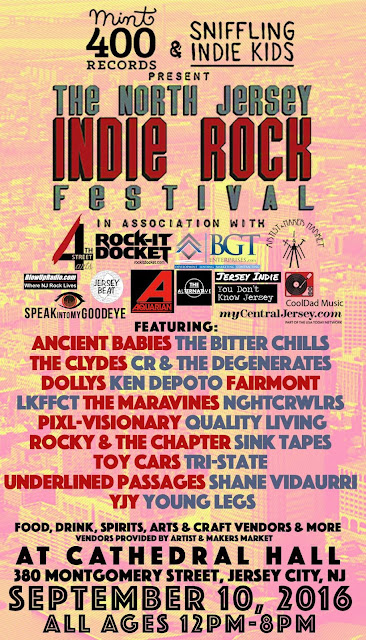 Posted by James Damion at 8:11 AM 0 comments 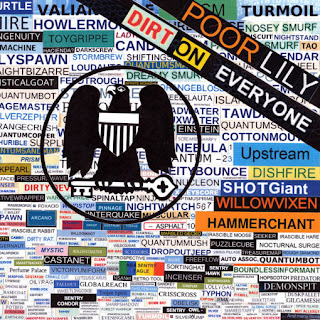 Sorry James, but I got a record in the mail from Poor Lily a few days ago and I need to review it because it is a ripper.

Poor Lily first caught my attention a few years back with their Lp Vuxola which was a whirling dervish of what sounded to me like the Minutemen and Dead Kennedy's getting together for a heavy jam session. On "Dirt On Everyone" , Poor Lily keep that same intensity going but to my ears they sound even heavier and meaner, and I like it.

Anyway, click the link below and check Poor Lily out asap, they kick ass and deserve your attention....Dave G.

I'm dating this post August 3rd in order to put the blog back to sleep, however Dirt On Everyone is available as of 10/2016 at the above link so check it out!