The Milwaukees were among the handful of local bands invited to play Maxwell's back in July, 2013, during the club's final weeks under its old ownership.  So the Jersey City    power-rock quartet seemed the perfect choice to headline Jersey Beat's first showcase at Maxwell's under its new management. 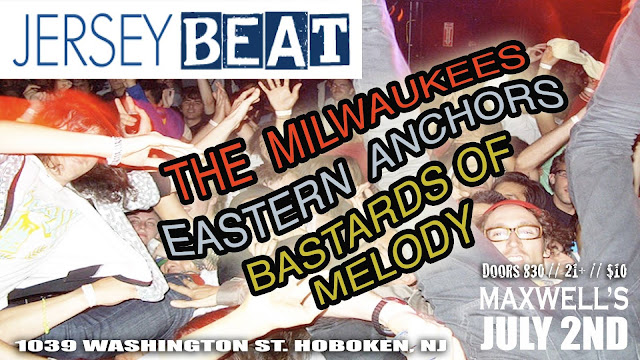 But the Milwaukees won't be the only familiar faces at Maxwell's on Thursday, July 2.  Eastern Anchors, featuring former members of New Brunswick rock powerhouse Aviso'Hara, and the power-pop Bastards Of Melody also have long histories at the legendary Hoboken club.  Enduring through lineup shifts, careers, marriages, and parenthood,  these three bands persevere as exponents of the Garden State's eclectic and ever evolving indie-rock scene.

As I made my way downstairs and towards the stage where Trenton's The Wailing Kids were about midway through their set. 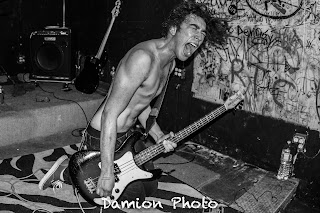 The bands eclectic mix of dream pop meets sweaty emo played well to the intimate, yet enthusiastic crowd. There was a small, yet notable crowd of rhythmically challenged girls gathered in front of the stage, dancing in somewhat of a comatose state. As the band sequenced from one song to another I became drained, realizing this was about as far from my liking as musically possible. While I would never go as far as saying they were any less than enjoyable to those in attendance. I can assure you. It wore on me quickly.
The Wailing Kids 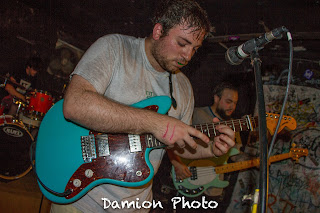 I was a bit curious. Immediately, her eyes popped as she mentioned Help Me Help You. "You gotta see this band." "You'll definitely like them." Thanks Ana, you know me too well. Standing at the corner of the stage as the band began to set up. I noticed not one, but two members sporting Title Fight tees. My night was about to get better. A lot better. Just as soon as the band launched in to it's set. Any anxiety or regrets of leaving the house that night vanished in to Montclair's thin air. Help Me Help You were just what Ana had promised.  The band's sound and approach quickly reminding me why, at an age where many are reaching for the latest issue of Golf Digest or a Viagra chaser. I'm still seeking out new music, venues and sounds.
Help Me Help You

Following Help Me Help You was MA's Snowhaus. And while common descriptions of sound, approach and overall execution might currently evade me. Going back to my initial thought 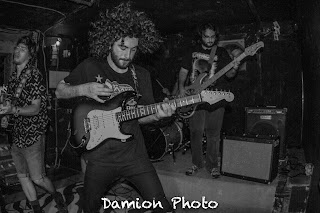 "This is Apeshit crazy good." might have to suffice. Boundless energy with a spirited delivery breaks down the walls of any preconceived notions of look or sound. While local comparisons to our beloved Front Bottoms. The bands overall approach might even draw influence might find inspiration in older acts such a the oft celebrated They Might Be Giants and the influential Maryland act Half Japanese. All influences aside. Snowhaus left a lasting impression on me. One that has me hoping their next visit to the garden state is sooner than later.
Snowhaus 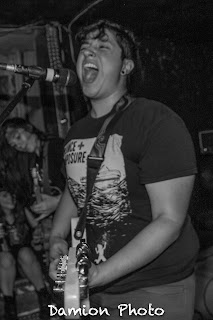 Headlining the night were local favorites         Archie Alone. Fresh off their recent four song EP Through the Door. See Review Here and a fist full of shows I was unable to attend.                        The mere presence of the band was both a site for soar eyes and a welcome gift for curious ears. While it would be hard to heap any more praise then I already have on this band. It goes without saying that they've single handedly rescued the term EMO from the teary eyed preteens and eyeliner goth toys that made Hot Topic popular and EMO unlistenable in the early to mid aughts. Emotional yet unflinching. Archie Alone mixes deeply cathartic vocals and lyrics with metallic guitar riffage and a thunderous rhythm section.     If memory serves this old curmudgeon.               My last experience seeing the band live was also vocalist Nicole Mesce's debut doubling as singer/rhythm guitarist. At the time, I wondered how it would effect her live performance.
With mere inches separating us just months later. The transition now looks to have gone off seamlessly. Overall, their set was a healthy mix of older material and that of what's featured on Through the Door. Music that makes you want to listen, sing along with and support wholeheartedly. Well Done.
Archie Alone 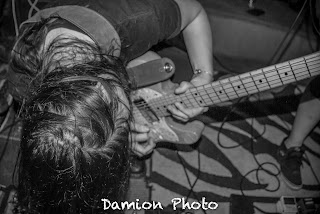 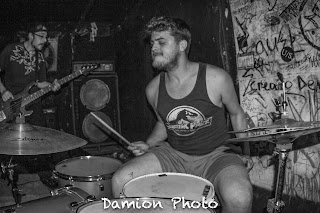 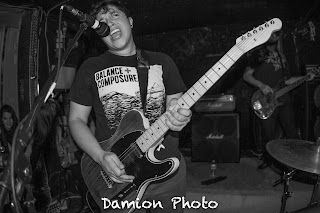 Every now and then I catch myself thinking "If I only had a record label." "This would be the first band I'd sign." Over the last couple of years that thought seems to limit itself to the many times I've listened to or seen a live performance of New Jersey's Archie Alone.
And while the band has been a personal favorite for some time now. Archie Alone's studio and recorded output has been criminally sparse. 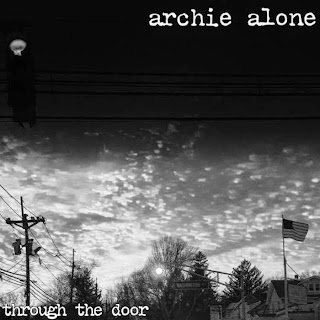 Limiting our exposure to their live performances at local clubs such as The Meatlocker,
ABC No Rio and everywhere in between.

On their latest EP
Through the Door, a four song cassette release recorded within the cavernous walls of the bands home away from homes. Archie Alone, with the help of their close friend, producer and wonder kin
Ana Dobrian, carve out on of the most powerfully emotive releases I've heard in ages. Warm, yet crushing guitars meet powerfully emotive vocals that reach heights of strength and vulnerability seldom heard in music today. Vocalist (and as in recent months, second guitar) Nicole Mesce has a unique ability that keeps the listener hanging on every word as if it was the last gasp of a beloved spokesman of our generation. While the bands personnel may have not even been born when bands such as Embrace, 3 and Rites of Spring were leaving their footprints on what was to become known as Emo. Archie Alone immediately remind me of the impact those bands and that sound had on me. I can easily look to the third track Furlough as evidence to the spell this release has put on me. The best way to describe my reaction would be to note the chills that travelled up and down my spine as it's four plus minutes unfolded.

Overall, a vital and absolutely necessary release that has a very intimate and live vibe about it. One that makes you feel as if you're being treated to a living room performance. Through the Door is available on cassette (While they last) which includes a digital download for those of us without access to such ancient technology.
Check their bandcamp page for more info. James Damion

While it's hard to digest the fact that H20 have been a Hardcore staple for over twenty years. The fact that the band are considered by many to be legends of the genre is an even harder pill to swallow. Too each their own I guess. Having seen the band a handful of times in their early years. H20's energy, passion and take on positive Hardcore cannot be questioned.          I can't go without praising Toby's boundless energy and dedication to the music and the message. He is, after all is said and done. A hyperbolic chamber of endless energy and charisma. 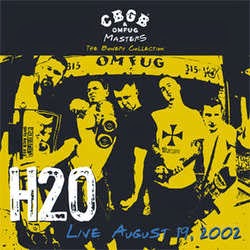 That said, I never found the bands sound, music or songs to be anything more than formulaic and somewhat cartoonish. Strange, considering I own every record they've ever put out.

While no one can question H20's dedication to Hardcore, it's history and it's sustenance. I don't see any good reason to drop a hard twenty on what usually serve as bonus tracks on most albums. The soundboard quality at CBGB's was always worth praise and the sound is very good comparing to many live albums. However, considering 2002 "The glory days of Sunday Hardcore matinees at CBGB''s" as posted on  Revhq. might be one of the greatest over statements in promotional history. "Live August 19 2002" features the entire 16 song set. If you were there and want to relive the past. Go for it. If you weren't. You shouldn't really care.
James Damion