When I recently got in touch with Brian about our interview. He seemed curious as to why I, or anyone else for that matter, would be interested in doing or reading an interview with him. To be 110% truthful, Brian perfectly fits the mold for most of the interviews I've done or been interested in doing over the years. Getting to know someone who's inspired me with their music, art or straight up creative nature interests me more than any upcoming release date, tour or single.

For me personally, Brian Musikoff fits the bill for the kind of interviews and exchanges I prefer to approach. As the artist who created the logo United By Rocket Science and the charismatic bass player for Friends, Romans & Countryman and Stuyvesant. (A band whose music and live performances brought me more joy than I could ever wish for. ) So much so, that whenever I think of or hear their music. I'm brought back to my time in Hoboken ans well as my nights at Maxwell's. The music venue that first brought me to the now famed town in the early 90's. I'm very appreciative of Brian's time and his helping me build a bridge between my current home in New Jersey to my soon to be new one in Seattle. Here's what he had to share. (Interview and images by yours truely, James Damion.)


When I found out that I would soon be relocating to Seattle. I took comfort in the fact that I would be able to look up  an old friend from the old neighborhood.

What was it that sparked your move to Seattle? 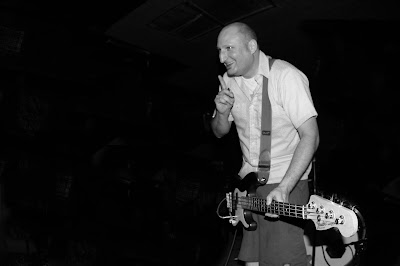 After being fought, fucked, and educated in the NY/NJ area for 45 years of my life I was suddenly overcome by an insatiable desire to tear up my roots; something that (with the exception of a 4 month stint in Newport, Rhode Island in '92) I have never experienced before. I needed a change and I needed to relocate myself to a slower urban environment.

Over the past 20 plus years I have observed a very lame and grotesque assimilation in the NYC area as far as being a cultural epicenter is concerned. I'm speaking for no one else other than myself here when I say that I have been feeling an ever growing increased tension toward the new generation of entitled and naive people who have outwardly exhibit a blatant disregard for NYC culture, and toward those who's basked sense of entitled security which has made them feel comfortable enough to behave disrespectfully with out consequence. I have seen the greater wave of social and economic interest entirely shut down the venues, shops, and restaurants that I hold close to heart.

What were some of your initial impressions of the area? Pros and cons for any East Coasters looking to move there?

As with any metropolitan area, the local true blue natives are going to be understandably defensive against an influx of new comers and their affects on the local economic and social climate. As far as the weather itself, new comers need to be prepared for a long, wet, grey winters. The sun only appears in bursts between November and February and the cold misty rain is frequent. Personally, and to the dismay of many defensive locals, I love the winter weather in Seattle. I see it as "Forrest weather". I'm here to contribute more than I take, and those few who are opposed or uncomfortable with me being here have no choice in the matter.

What do you miss most about New Jersey? In particular, Hoboken.

I miss the pizza, the "mutz", the NYC view along the Hudson, our band Stuyvesant, my immediate circle of dorks, my bartender family, and the proximity to the beach.

Have you had any musical collaborations since you've been out there?

Not yet, but I shall.

Live from the Barrage

I knew John and Patrick of LFTB largely through the independent rock community, and not just here in NYC and NJ either. I initially appeared on the the show as a guest and I guess our host John Houlihan and Producer Tömmy Röckstar immediately picked up on my dedication to the mutual interests associated with the show. Since I've moved away from the NYC area I continue to support the show by booking guests, designing the weekly promotional images, and promoting the show on social media. The show is still focused on discussion regarding (but not exclusive to): good music and those who create it, good comedy and those who best understand it, crap/not crap, The Ryan Game, TRNN NOOZ, and Mario Asaro.

You grew up in a few stops from me in Bayside, Queens. Some of my earliest adventures included heading to Flushing's Main St. and eventually Mike's Comic Hut. Can you share some of your early impressions of living in Queens?

I lived in Bayside, Queens until I was 11 years old, where my experiences on my own were limited to nearby destinations along Bell Blvd such as Peter Pan Arcade, White Castle, George's Pizza, the Bayside Batting Range, and Bayside Cinema (where I saw Empire Strikes Back, E.T., Stripes, and Poltergeist). My grandparents lived in Flushing on Main Street so I was there often, and of course this proximity made me a regular attendee at Shea (whether legitimately or vagrantly, heh). My dad moved around a lot but always remained in Queens, so I've resided all over neighborhoods such as Forrest Hills, Woodside, and Astoria.

What initially interested you in art and how did it influence your decision to go to Art school?
As a hyperactive kid, music on the stereo in my ears and a pencil and paper in my hands were the only things that kept my interest as child. By the time I survived the social warfare of a suburban NJ high school (my mom remarried and moved us to Englishtown, NJ in 1983) I knew that a state school, or community college was not for me.

You designed the logo for U.B.R.S. Aside from here and the work you've done for Stuyvesant. Who else have you worked with?

I've designed animation for comedians such as Patton Oswalt and Brian Posehn, and my clients include Warner Bros Records and Relapse Records.

The bass has long been my favorite instrument. Was it the first instrument you learned to play? Inspiration? 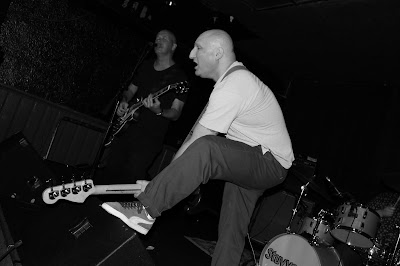 My first ever instrument learned was bass drum for my grade school band. Moving on to Junior High I wasn't focused enough or disciplined to study drums, so naturally I started piano. (That doesn't require focus or discipline, right?)  In High School I fancied myself a Hardcore singer with Wake Up Call, and by college I had taken up bass because the band that I was in at the time (Overeasy with Brandon Stosuy of the website Pitchfork)  just had their bassist quit. To this day I can still not play chords. I live for pushing air and fattening riffs.

What was/were some of the first bands you played with?

My first ever band was in 1986, I played Casio keys for a middle school rap group that consisted of two white guys and two black guys called The Funky 4 (no relation to the much more accomplished The Funky Four Plus One of the Bronx), we played talent shows and battle of the bands. In High School I was in a home recording "basement band" with my best friend called Spleverb. Spelverb were reminiscent of Ween (I guess) and by the time of graduation we had evolved to a full 4 piece band. I was in a few punk bands that never got off the ground in the early 90s, and then in 1996 I was introduced to the members of FRC.

I first learned about Friends, Romans, Countryman from Al (Dromedary / Sugarblast). Can you tell me how you met Sean and how the  band came to be?

Bill Dolan (American Standard) and I were both at the first big Descendents reunion show at the Stone Pony where he introduced me to F.R.C. members Sean Adams and Dan Murphy who were in need of a bass player. So, we connected really easily being that, after all, we were together at a Descendents show (no pun intended), and we all lived in or around the Hoboken/Jersey City area. I played and recorded with FRC from 1996-2002, and then in 2003 Sean and I joined Ralph Malanga from Footstone to form Stuyvesant.

Stuyvesant on Dromedary Records
Posted by James Damion at 10:42 AM 0 comments