A Juicy Night at the Pussy Pad.

Sometimes I wish there were some sort of telaporter to get me from the couch to the show. For with all the inspiration and passion for music I have. There is an equal if not greater combination of anxiety, indecision appreciation for what I have right here at home.
Lucky for me, the draw of live music is often stronger than most other feeling.

As I parked my car. My windshield was graced with the friendly mug of NGHTCRWLRS guitarist Frank DeFranco. Not a bad way to start the night. Without haste, we made our way through the small corridor that separated the semi attached homes, past the oddly placed antique piano and towards the backyard where we were greeted by our host and those already in attendance. As the bands arrived along with other show goers. I couldn't help but notice the overly friendly and welcome atmosphere the Pussy Pad provided. Before long, we headed down the stairs towards the basement where the first band was already setting up and tuning in.

As much as I enjoyed the opening band. I found myself spending most of their set trying to figure out my camera settings. I had been using it earlier that day in the studio and completely forgot to reset the damn thing. (I tell ya'. It's always something with me. I have a chance to see Toy Cars next week and promise to be on my most attentive behavior.
Toy Cars 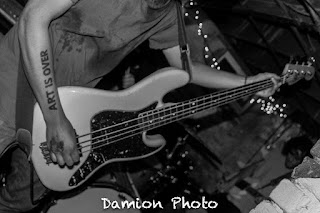 Next up were Lancaster Pennsylvania's Spill. This was my first exposure to the band and to say they left a lasting impression would be an understatement. A nice mix of garage meets melody friendly Punk rock with an all inclusive stage presence and banter.
The small, yet intimate crowd in attendance seemed to vibe off each note. Great stuff worth seeking out.
SPILL 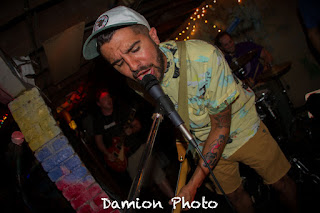 NGHTCRWLRS followed
(Or did they?) This was my third time seeing them live.
The band, though hard to describe, are somewhat of a local super group.
(Featuring present and former members of
Holy City Zoo, Nico Blues,
All Sensory Void, Lake Effect and Man on Fire.
(Just to name a few.)
Their sound is as musical as it is eclectic.  Their set was part Punk Rock, part experimental  and part off Broadway production of Silence of the Lambs. Since my first taste of this band I've been second guessing myself on what I should be hearing and what I'm actually hearing. Thoroughly impressive. I like that they keep me guessing.
NGHTCRWLRS

Closing the night was the band I put gas in the car to see. Truth be told. I've been hearing about Lake Effect for some time. So long and so often, that seeing the band perform live seemed to climb higher and higher on my "Must Do" list from one day to the next.
Getting out to finally put the voices in my head to rest was just what this out patient needed. Fronted by singer guitarist Max Rauch. (Who also happens to play the drums for NGHTCRWLRS.) 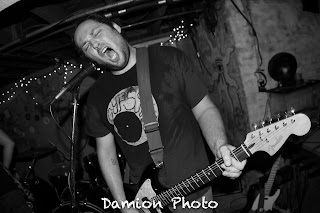 The bands set was an impressive mix of musically diverse sounds and child like, wild abandon. There came a point where where Lake Effect and those in attendance became one sweaty mess. From there I doubt anyone could tell who was who. I can only hope that the band were able to make it home with all their pieces in tact. Lake Effect have a show coming up at Jersey City's The Dopeness on September 10th. Be sure to scoop up a copy of their debut album/CD thing
American Sarcasm before, during or after. You wont be sorry.
Lake Effect
Special thanks go out to Frank ( NGHTCRWLRS / Sniffling Indie Kids ) and out host.
If it weren't for basement shows and the people kind enough to open their homes to strangers. We would not have half the music scene we have today. Respect.
James Damion

New Jersey's Hardcore Punk newcomers Aguirre have posted an impressive video which features the bands debut album. Featuring current and former members of acts such as
Melissa & Paul, Control, Hell Mary, Barcode Youth and many others. The band comes to the table with an impressive pedigree. The band will be playing their first show friday night at Tony's in Stockholm NJ on Friday  Details Here and are said to have copies of the album with them the following night when they play at Taps Pub. Details Here Aguirre has a site coming soon. For now you can go support them on their Facebook page. Here  JD