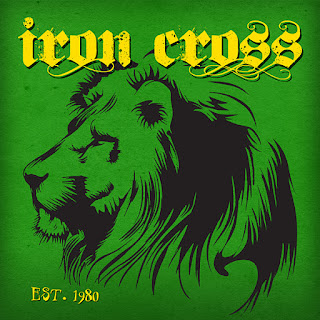 "Holy 1980 Batman"
When I saw this Iron Cross EP I was transported to my long lost Tweens. A time when skinheads spent a lot of their spare, working class, time trying to convince anyone and everyone that they weren't racist nazi's and that they listened to Skrewdriver because of the bands awesome music, not their horribly racist homophobic lyrics. All kidding aside, I first learned about
Iron Cross when Agnostic Front covered their anthemic "Crucified" on their somewhat forgettable "Liberty and Justice for…" Soon after realizing that there are rare instances when a cover song betters it's original.

All that aside Iron Cross are an iconic band that are often sited as America's first
Oi band and somewhat of the misfit of the Dischord family. Though their lyrics were often combative and contained racist and homophobic diatribes; The band has forever stuck to it's "We're not a Racist-Nazi band" stance.

On their first proper release since 1983 Iron Cross haven't really changed a thing sound wise. "Est. 1982" is hard as fuck and just as pissed but not really any better than what they were doing over thirty years ago. The listener can take that any way they want.
Be it positive, negative or just plain apathetic. For me personally it just sounds like something that would be best left to drunken banter amongst old friends. In somewhat typical fashion for bands that are trying to re-ignite their original fan base; There's a revised version of their most recognizable song "Crucify". Unfortunately, "Est 1980" is best left for die hard fans of the band and the tragically nostalgic.
As a saving grace, the record comes on yellow/gold colored split wax. James Damion