Doziac - What Do We Do EP 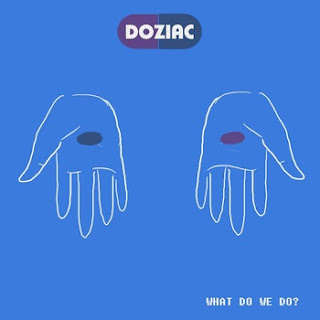 Formed in October 2012 New York's three piece act Doziac seem to be searching for a place to fit sound wise. Describing themselves as pop punk, grunge, rock, alternative to name a few. They seem to be a band searching for both their sound and identity.
"What we do" features five songs of doze, doze, doze, uninspiring and underwhelming pop rock.
"Had a Baby", the EP's opening track is a good example of what's to come with it's campy and sometimes unbearable vocals. The downward spiral continues with a cover of Zebrahead's "Anthem". A song that would be better left uncovered. "What Do We Do" the EP's title song is by far the best track here. It's sweeping rhythms and vocals offer a nice pop flavor that's reminiscent of 60's pop puppets the Monkees. And while the song "Ecstasy" definitely has it's quirky moments. As a whole, it doesn't really grab me. It's follow up and the Ep's closer "Irrelevant Love Song" is a go nowhere doze fest that perfectly closes the EP out just as it was opened. Poppy, yet dull and underwhelming.
Though there is some very good musicianship on display here. I honestly felt no connection to the songs themselves. "What do we do" did nothing to make me want to hear more or invest any listening time in the band. James Damion
Doziak

A rare side note; I understand the bands members are young and Doziac is still a band in it's infancy. But when describing your band and it's influences, stick to what you love. No one cares about what you don't like. Disrespecting another genre, regardless of any shortcomings it may have in your already advanced opinion is not very smart. And though you may have been influenced by The Beatles and Nirvana (Most bands have whether they like to admit it or not.) "We have been told we sound like The Beatles and Nirvana."
Might be the biggest load of shit I've ever read.