Thinning The Herd - Freedom from the Known 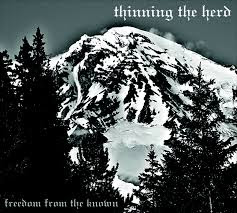 If you've been following the many highs and absolute lows of Thinning the Herd over the past year or so you will know how absolutely important this record is to the band and it's founder Gavin Spielman.
With a number of personnel changes over the years and upon hearing of the very tragic and unforeseen death of the bands drummer Rich Cimato on December 26th, I'm sure many wondered about the future of Thinning the Herd. Would they sink or would they swim? Luckily for all involved, the future would prove the latter.

"Freedom from the Known" is highlighted by Spielman's exceptional guitar wizardry, trademark thick muscular riffs and powerful vocals. The album opens with the Motorhead heaviness and menacing vocals of "Never Wanted". "Doctor Reed", my personal favorite track follows, bringing early Metallica to mind  with it's angry growls and abusive guitar attack.
The albums third track "Sludge" lives up to it's title by bringing things to a slow, grinding pace. It's muddier than a Warrior Dash, with elements of unrelenting bluesy stoner rock, with Sabbath inspired rhythms and power. Spiraling , spoken word samples sprinkled in give the album a nice narrative feel. While the lyrics convey a spiritual and survivalist nature that hints at transcendentalism.

Released on St. Marks Records, "Freedom from the Known" is a stellar collection of songs and a soaring triumph for a band that's been through the ringer. Gavin's musicianship, leadership and overall resilience stand as testament of what can be accomplished with the drive and determination to execute the overall plan. James Damion

Get it Here TTH music