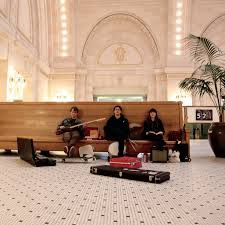 When I originally picked up
Big Eyes 2010 Demo Ep it was with the hopes of balancing out my Grave Mistake Records cart. There I was bringing my cart to an even sixty dollars adding a band unknown to me strictly based on the label cred.
Little did I know that the ep's four songs would become the highlight of that days purchase, thus introducing me to a band that was residing right in my back yard known as Brooklyn.

A few years later, with a couple of splits and the
"Back to the moon" EP tucked nicely under their belts. The band, now residing in Seattle, have unleashed their first LP.

"Almost Famous" finds this very talented trio in top form. Excellent songwriting and musicianship marked by Kate Eldridge's youthful voice and hook laden, riff heavy, guitar prowess. Though comparisons to Kate Shattuck of the Muffs are both accurate and complimentary. I can also hear hints of Joan Jett's early solo work. "Half the Time" ever so slightly recalls Jett's "You Don't Know What You've Got." The eleven songs featured on "Almost Famous" highlight the growth, maturity and overall focus of a band who's beginnings always seemed less than humble. As many of us less than talented rock writers hit the mid point of 2013 and begin looking at the years very best releases, "Almost Famous" sits rather comfortably at the top of mine. My turntable, not to mention my ears, humbly thank the band. James Damion

Get it Here  Grave Mistake Records