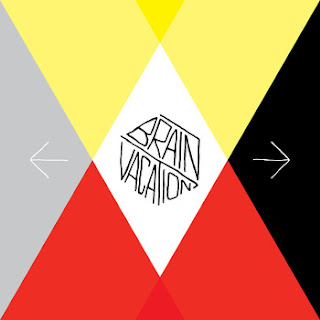 I wasn't sure what to expect after the first thirty seconds or so of the opening track "Victims". In all honesty I thought I was about to hear a full on surf instrumental and found myself fully prepared  to move on to the next submission. Then suddenly something awesome happened. What had been coming down the pipe. Flipping a switch that gave way to a nice thick heavy riff. I was hooked and "Victims" quickly reeled me in.
The following track
"Reprimand Sandwich" bites even harder with an opening bass line and verbal attack that brings to mind the Bad Brains classic "Attitude". "Waste Mountain" is another favorite of the ten song album.
The song really put it's hooks in me with it's driving chorus, guitar chords and pounding rhythms.

Though I found the band is a little difficult to peg. (Which in essence is a good thing.)
The songs have an early LA Punk vibe reminiscent of bands such as Bad Religion and
The Adolescents. Brain Vacation can also be compared to current  Raleigh North Carolina's punks Whatever Brains in that both bands are fast and heavy with a sense of quirkiness in their approach. Overall this was a great listen that really kept my attention throughout it's ten songs.

"The Musician" is available for free download Here. However, I highly recommend ordering the vinyl. Pressed on severely heavy 180 gram “molten core” colored vinyl and housed in a printed matte jacket with 2-sided lyric sheet/insert, shrink-wrapped for posterity and limited to 250 copies. Pretty damn tasty if you ask me. James Damion