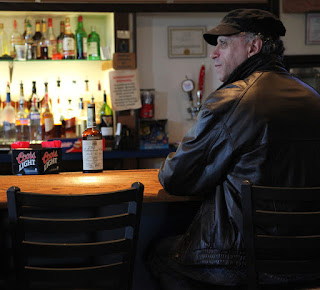 New Jersey's experimental duo Michael Ironside return with their follow up to their surprisingly good 2012 debut"Gelatin Moon". The fifteen song "Top Shelf Hooch", a collection of love songs about an alcoholic trying to find himself in the 21st century. Proves to this listener that a joke, when good, should be short and to the point.

The LP opens on a promising note with "Top Shelf Hooch". Highlighted by fuzzed out guitars that bring immediate comparisons to bands like
Fu Manchu and Mudhoney.

Experimental, campy and downright annoying at times. MI come off sounding more like a comedy troupe in the midst of performing a comedic tragedy. As most of the album rely's on the comedic aspect, "Top Shelf Hooch" becomes more of an annoyance or inside joke than anything.

Though I really enjoyed brief moments on "Top Shelf Hooch". Those where guitarist
Jeff Wassenger gets to shine. Adam Lepowski's voice and the mode of it's delivery is so incredibly annoying and over fifteen songs, absolutely unbearable. If it's any saving grace.
I feel things could have been a lot different if the they trashed most of the album and made an EP from the tracks "Top Shelf Hooch", "Vapid Whore"and "Look What's Under the Hood". Unfortunately this album is comes off like a bad college prank that went on way too long. James Damion
Posted by James Damion at 10:05 PM