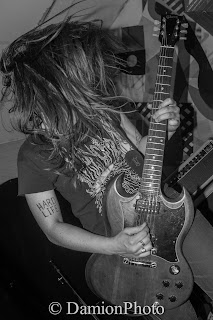 Though it is way too late to do a review of the  Big Eyes performance at Brooklyn's Death By Audio;
It's never too late to post a few images and thoughts from the night. With a highly anticipated and praised debut album 'Almost Famous' in tow, the Seattle by way of Brookyn trio returned to their roots to play a high energy set at
Death By Audio in Williamsburg. There was plenty of positive vibes on both the stage and the dance floor. Kate is one of the fiercest guitarists I've seen, she packs a ton of energy and rock n' roll swagger into a small frame. I had the pleasure of speaking to Kate before and after the show and can't say enough about her or anyone involved with the band. This was my first trip to Brooklyn's Death By Audio and everyone involved with the venue were friendly and easy going. The club features two boxy rooms. The front features artful walls, a stage and sizable dance floor. Whlie the back features tables for band merch and an area for cheap refreshments. Overall, a nice little DIY space.
James Damion

Check out my review of Big Eyes 'Almost Famous' Here