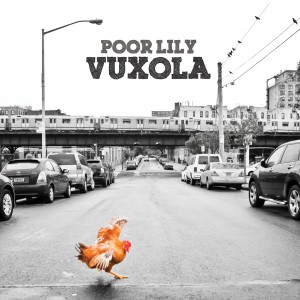 Poor Lily play music that is a little hard to describe, and unfortunately, they only gave me two songs to sample from their sophomore album "Vuxola" which doesn't really give me the opportunity to see how the album is going to unfold, however based on the crazy energy on display in these two songs the band have definitely peeked my interest.

Song #1 "Crunchy Skulls" starts out with some badass bass rumbling with wah wah type guitar noise layered over the top. The vocals are a wonderful combination of anger and madness that bring Jello Biafra to mind.

Song #2 "The  Days Are Not Piano Keys" whips by in a high speed whirlwind that drops another awesome bass run in the middle of the song before whipping itself back into a fury as it heads for the finish line.

In closing, I have to say that these two songs are mighty impressive and they have certainly left me wanting to hear more.If you're an adventurous listener who would like to hear something that doesn't fit neatly into any particular genre and sounds like no one else out there at the moment then please give Poor Lily two minutes and twenty four seconds of your day (total length of both songs)...Dave G.