Thinning the Herd, Cinema Cinema and Some Shots of Jack Daniels Highlight My First Trip to Brooklyn's Grand Victory

Each year as the weather gets warmer and the days longer I find myself escaping to Brooklyn. Though I was born in Queens, New York. Brooklyn holds a special place in my heart. How could it not? Having gone to school there and worked my first "Suit Related" job just a few miles away. (Hey, my Mother was born and raised in the storied borough...)
On this particular night my reason for getting on to the L train had nothing to do with nostalgia or family values. It was to celebrate the hell out of the fact that two of my favorite heavy hitters (Thinning the Herd and Cinema Cinema) were playing the same bill. A show that would bring together two very heavy bands that though similar in their decibel levels. Take different routes and speeds when making deliveries.

This would mark my first trip to Brooklyn's Grand Victory. (I attempted to drive there once last year to see Cinema Cinema and got completely lost.) When I first heard of the place, the clubs name had me thinking of a larger club the size of perhaps Bowery Electric or even the Bowery Ballroom. A place that would featured thick necked bouncers with form fitting black shirts and flashlights. Luckily for me, that vision was more of a hallucination. In truth, if it were not for the small crowd outside the bar. We would have walked right past it.
Though it is quite nondescript exterior, the venue itself quickly became my new favorite watering hole. As I headed to the bar I found myself surrounded by some friendly characters. When I told the shaved head next to me that he reminded me of a young
Jimmy Drescher. (Murphy's Law) He raised his glass to me and ordered us some shots of Whiskey. I'm glad he took it as a compliment. The night was officially off to a good start. 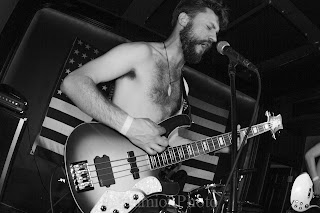 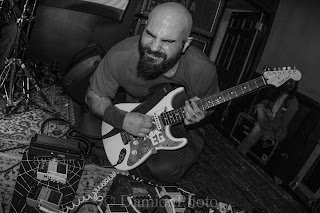 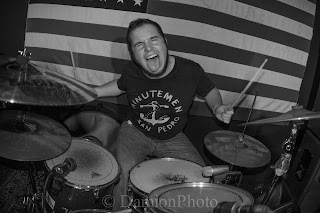 If you're anything like me, when you find a band you really love you want to see them live as much as possible. When putting that plan into practice you often run the risk of burn out. Sure, you love the band, that's already a given. However seeing them perform the same set numerous times within a six to eight month period can wear down that favorite band status. Fortunately for me, Ev and Paul (Cinema Cinema) keep their sets fresh and somewhat unpredictable. Many is the time I've heard them perform the song "Lady Abortion." Funny thing is I feel I'm hearing it differently each time. In seeing them numerous times I find one of my greatest rewards is watching the reactions and expressions of the faces in the crowd. That in itself is an experience. Cinema Cinema is playing with the legendary Black Flag at Brooklyn's Warsaw. Go, get out, get fucked.
Cinema Cinema 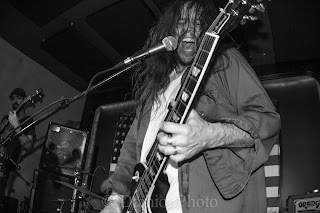 The band has had its share of personnel changes and personal struggles marked by the death of their drummer and beloved friend.... They since soldiered on releasing a new album
"Freedom from the Known" and playing shows with new drummer Garth Mackaleavey.
The band played an excellent set featuring much of the new albums material.
Gavin Spielman makes for the perfect frontman. The singer/guitarist/founder has an incredible stage presence.
Focused and ferocious, I can see him easily winning a stare down contest with Metallica's James Hetfield. The songs from the new album sound incredible to say the very least. Seeing them perform made me realize how much I've really missed these guys in the past year. Upon hearing their set, I felt assured that it wouldn't be long before our paths crossed again. I'm really glad I had the chance to see these two bands play a show together.
Thinning the Herd 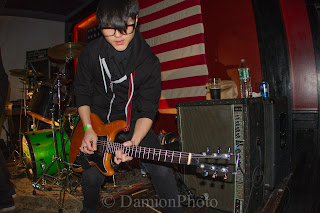 Closing the night were Bbigpigg. I had never heard or heard or heard of these guys and did not have the slightest inkling of what I was about to experience. As the band assembled, one of the band members placed a studio flood light just adjacent to the front of the stage. I thought to myself "Okay, this is going to get weird." Luckily for me and everyone present at
Grand Victory that night, it did.
Noisy, experimental, loud and unexpectedly excellent. The bands style and performance could be best explained as a tribal ritual, a possession of not only the ears but the soul. Influences ranging from the Melvins to Jesus Lizard could be felt but their sound and style was one that was really all their own.
BbigPigg

I left fulfilled, exhausted and exhilarated all at the same time. Grand Victory is a great spot that seems to gather an excellent crowd of interesting and varied crowd. I plan on returning on a regular basis.