Caught in an Altercation; Talking with Andy Guida Part I

In part I of my interview with Andy Guida I decided to focus on the reunion and history of the band Altercation. Saturday night the band will be taking the stage at Webster Hall for day one of this years Black N' Blue Ball. As far as reunions go, this will be one for the ages considering the band has not performed together in more than twenty-five years.
Though they only had a demo, a handful of shows and a memorable WNYU set.
They left a permanent mark on the first decade of the storied and oft misunderstood NYHC scene. In my mind the band always seemed to fit in perfectly with contemporaries such as Breakdown, Raw Deal and Krakdown. Good company if you ask anyone that was around at the time. This hopes to be the first of a trilogy of interviews I'll be doing with Andy.
Thanks for the walk through. James Damion 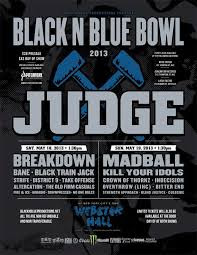 James: Altercation were a special band for me back in the late 80's. I remember having an old army knapsack that had Altercation written with a big fat marker on it. The name Altercation looked perfect wedged between the likes of Raw Deal,
Breakdown, Krakdown and the NY Hoods. Can you tell me how the idea of bringing Altercation back to the present came about?

Andy: There were two near misses for Altercation reunions over the years. First, maybe 1989, we rehearsed at least once that I can remember. That was with AJ Novello on rhythm guitar instead of Myles. Then about ten years ago we thought of doing it. A promoter contacted me about doing a show. We even started rehearsing with
Scott Heatherly,
(Lament, Running Like Thieves) on bass. No second guitar. In the end we decided we didn’t want to do it. The band sounded great but we didn’t feel right about it. Over the years I’ve been approached a few times about releasing the demo as a 7”. I always resisted doing it for various reasons. But then we did the Absolution record with Ryan at Lushlife.
That went smoothly and he and I started discussing other releases we could do. Independently of that, I was contacted about doing the B&B Bowl this year. It made sense to reunite now. Myles can’t do it because of work commitments. Eddie wasn’t interested.
So it’s Paul, Jay and me for original members, and Dan Cav (Resurrection, Absolution) on bass. I think we sound great. I’m excited to get this band in front of people! We’ll see what else we do after the B&B Bowl. 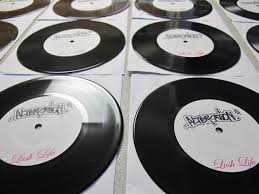 James: What's going on with the 7 inch? Why did you decide to re record it? This practice of re-recording
old material is becoming somewhat prevalent with a lot of older Hardcore bands. As someone who was raised on these bands. It comes off as somewhat of a cop out.
Why do you think bands tend to tighten the screws on old recordings as opposed to writing and releasing new material?

Andy: The record is not re-recorded old songs. It is the old versions of the old songs. It’s a phase corrected, mastered version of the original demo. We don’t have plans for any new material or re-recording the old stuff. But, there is a new outro on one old song in the live set. Maybe a free download of a current rehearsal recording playing the old songs? We have changed some things in a few songs. Just extending certain parts, not adding new. People want to hear what they love the band for. They don’t want to hear it all fucked up. When I saw The Police on their reunion tour I thought they were weak. "Next to You", as a mid tempo laid back groove is not good. I didn’t want them to rearrange the songs I knew from studio and live recordings. They changed too many songs. It’s one thing for a band that is consistently together to morph songs. It’s another when you come back after 20+ years and songs sound completely different, however recognizable. Altercation, in it’s current state as a reunion band, wants to give people what they remember.
As far as old bands re-recording old songs I can see why it’s done. In the case of Absolution we did it because Gavin and Djinji felt strongly that the recording and performances on their 7” was sub-par. I have to agree. And I think the record we did destroys the old one. I haven’t listened to any of the redo records except for Exodus doing "Bonded By Blood". I don’t like it. The original was well played, well recorded and it was heavy as fuck, perfect to me.
So I can see both sides. Some fans want the original. But to me, if the original isn’t good it needs correction. It’s all about perspective though. 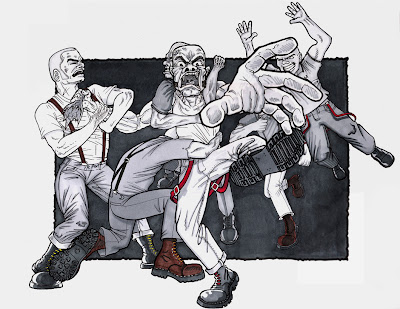 James: I recall seeing Altercation several times and remember the Crucial Chaos set rather fondly.
The band had a certain vibe and energy about them that was dangerous and explosive.
As if to say, "Before this set is over, blood will flow." Was that reputation more perceived or earned?

James: I understand one of the bands girlfriends at the time wrote a lot of Altercations lyrics. I can only imagine that was a first in the history of NYHC. How did that situation present itself?

Andy: I don’t know how that happened. I must agree, it’s got to be a first. Bianca, then Paul’s girlfriend, wrote the lyrics. I don’t remember how that came to be. I don’t recall caring, I thought they were great lyrics. We all did. We were young and clueless. And very, very angry. Anger looking for a direction. The lyrics aided in direction, I suppose. Though I never noticed it back then. There was mention of borderline "racist lyrics".

James: There was a lot of racial tension around that time. I was curious about how those ideas materialized and how they were received in the Hardcore community at the time.

Andy: There was a pretty big skinhead thing going on at that point so we were very well
received by a segment of the people going to shows. I’m sure there were plenty that
thought badly of us. Within in a year of being in Altercation I had regrets about aspects
of the band. I read something where Walter Schreifels said he saw us and worried the
dark side was going to win. That cracked me up. That’s a powerful reaction to evoke!
Though, not the one I want at this point in my life. There were definitely prejudiced and simply misguided lyrics. Also some stuff that’s not correct. Robert Chambers, who, “Getting Away with Murder” was about, did not get away with it. He went to jail. Although the sentiment, the rich “getting away with it”, still is true. But I can’t change what was said. The music is great, and we can change some lines live. If we were skrewdriver I couldn’t stomach doing a reunion. We were hardly that.

James: When recording the record did you make a point of changing them?

Andy: Live Jay is changing some lines. When he remembers. Hearing it one way for twenty six  years made an impression!

James: Can we expect new material and songs from the band in the future?

Andy: Don’t expect new songs from us. It could happen, but it’s unlikely