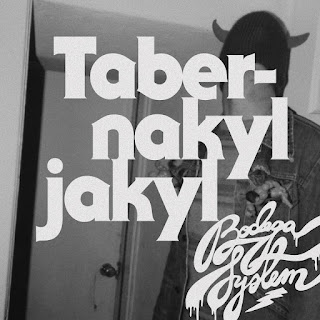 Over the last couple of days I've had Bodega System's "Taber-nackyl jakyl" with me on a pretty consistent basis.
Each time taking something different away from the experience.

Formed in 1995 and still kicking out a style that infuses the best of early hip hop, electro and lo-fi drone. Overall giving their sound a dark yet chill vibe that I found addictive.

"The Whorehouse McGuffin" plays like a midnight run into the heart of darkness.
I can imagine hearing this on the soundtrack to my favorite movie. The part where the
anti-hero digs deep for  the strength he never knew he had in order to overcome or better yet, embrace his demons.

Bodega System reminds a lot of my early experiences listening to underground legends Dalek. It was undiscovered territory for me and though at first, I didn't really know what to make of it. I found myself wanting to dig deeper. It also conjured up vivid memories of hanging out with Patrick System during my mid teens. Hanging out in the school yard of P.S. 145, drinking 40's and perpetrating all sorts of shenanigans while discovering our love for acts such as Eric B. and Rakim, Public Enemy and The Beastie Boys. It was there that I feel Patrick was gathering the bricks that would build what was to become
"Bodega System".  James Damion
Posted by James Damion at 12:18 PM