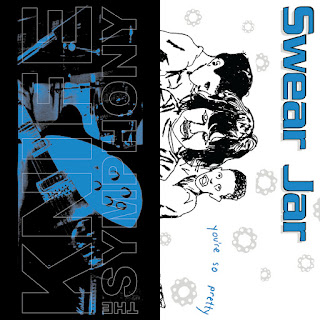 In the press release for the Knife The Symphony/Swear Jar split lp they note their influences to be "Amphetamine Reptile's noisiest and most abrasive work, NoMeansNo, Shellac, Minutemen and Crucifucks." which is all fine and good, however the one band not mentioned as an influence  by Knife The Symphony is At The Drive In and for some reason they are the first band that came to mind upon hearing  Knife The Symphony, it's likely the shouted vocals that are drawing that comparison for me. The bass playing on the other hand has a definite heavy Shellac feel. Overall Knife The Symphony are an energetic unit that should appeal to anyone who is a fan of the bands stated influences.

Swear Jar remind me a bit of bands like Bastro and Rodan just for a reference point and they deliver their music with much of the same intensity and power that Knife The Symphony brought to the A side of this Lp.

Over the past few years I have often complained about the lack of bands who just blow it out in the 90's way that bands like Drive Like Jehu , ATR, Rodan etc did. It sometimes feels to me that there is a lack of bands who draw their influences from the heavier aspects of the 90's indie scene. Yeah there are a ton of punk hardcore bands playing the 80's style, but sometimes it feels like the kids of today only recognize and emulate the wimpiest aspects of 90's indie rock and they forget that there were actually heavy, aggressive, energetic bands releasing amazing records in the 90's...Thank you Knife The Symphony and Swear Jar for showing me that the best part of the 90's indie music scene hasn't been completely forgotten...Dave G.

Listen and Purchase
Posted by Dave G at 2:39 PM