An Interview with The Sun The Moon The Stars

Every now and then I accidentally come across a band whose live set just simply blows my fucking mind. On one particular February night  I was standing in the slim corridor of Maxwells when I asked Adam Bird of Those Mockingbirds if he knew much about the bands they were playing with that night. Without pause he cocked back his head and said, "You absolutely have to check out The Sun The Moon The Stars". "The band is fucking amazing live." Heeding his words I made my way through the revolving doors. That night I learned a couple of things. 1. Adam Bird tells no lies. 2. The Sun The Moon The Stars were a band I wanted to get to know better. That night I spoke briefly with Matthew and  took home the bands record Mind Reader. Upon listening to Mind Reader the hooks sunk deeper and deeper moving me to contact their bearded, barefoot, singer/guitarist to learn more about the band and what they were all about. James Damion 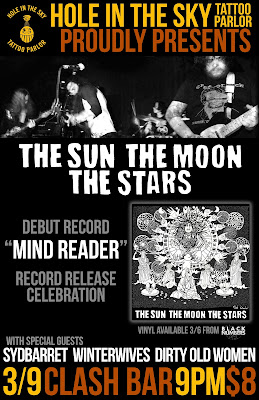 James: I was really sorry to have missed your record release show at The Clash Bar the other night. I heard you guys brought some much-needed energy to the place. How did everything go?

Matthew: Magical. We couldn't have asked for a better night. The support from our friends and family was absurd. Truly one of the best nights of music I've had in my life. It's a really cool little bar. I hope they will get a solid promoter and get some good music coming through.

James: Tell us a little about the new record "Mind Reader". How does it differ from "We are Swine"?

Matthew: "We are the Swine" was written mostly by me over the course of a year. I intended on making something for myself to find musicians and hopefully garnish some interest locally. At the time of recording "We are the Swine" I had already played with about ten different people, none of which really fit the mold besides Joe--and he barely fits into anything. Adam from Those Mockingbirds was living with me at the time and knew what I was looking for drum wise, so he stepped up and helped on drum duty for those demos.

"Mind Reader" came after Joe and Ian so we all worked on some of the songs together rather than it being a one-man show. Vocally I started to find where I am more comfortable. There is just a lot more dynamics to the songs. A lot more time went into recording/writing. Way more polished overall. The truth is we recorded Mind Reader a pretty long time ago. We just got smashed with delays. To see it finally materialize is a blessing.

James: How did your signing with Black Numbers come about?

Matthew: I've known Dave since back when I was in The Oval Portrait. We've been buds forever. Once "Mind Reader" was done and needed a home I showed him the songs and it just sort of worked out. Black Numbers is a more punk centric label, but both Phil and Dave were excited to put out something heavy and I've always loved the DIY approach they have. It's been an adventure so far.

James: So you're in really good company. Have you played any shows with artists on the label?

Matthew: Not yet! We do have something lined up with Kill Wealthy Dowager. Banquets have been super busy as of late. The dudes in Luther love metal, so we really need to get down to Philly and party in a basement with those guys.

James: Are you planning on touring on the record?

Matthew: Regionally, yes. It's just not feasible for us to be on the road for 2-3 months at a time right now. This summer we are planning to do some dates with our buddies in Sydbarret and then some more with the riffs of Changes. Hopefully we can make it to a few fests later on in the year and maybe to Europe next year. 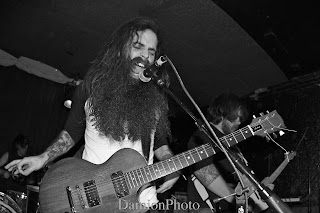 James: You guys are all over the Metal radar mixing a lot of different styles and blending all that aggression with a lot of harmony. It really makes you stand out. When you were forming the band and when you're writing songs now, is there a certain vibe or sound you're going for?

Matthew: We just like making loud heavy music you can bang your head and raise your fist too. Have fun, drink a beer, smoke a joint, be free and get loose--whatever gets you off. I've never been a "singer" before. This whole thing is new to me, but I just had some things I wanted to say and it all just worked out. So it goes.

James: The Sun The Moon The Stars is a pretty all-encompassing name. I get somewhat of a spiritual vibe from it. What does it mean to you personally?

Matthew: Honestly this came right from Black Sabbath's NIB. That's not to say it didn't manifest itself into other meanings. Sometimes I'll name something or write something and later on it will hit me and I'll think, "Holy shit that’s what that meant." The unconscious mind is outstandingly powerfully. Sometimes I just trust what it's giving me and run with it. 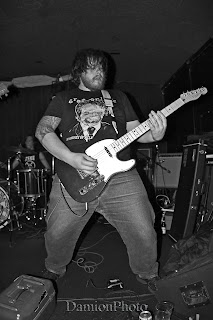 James: You've had two Birds in the band one past in Adam and one present in Evan. Besides their instruments of choice. How would you describe the personalities, similarities and differences? Do you think they could ever co-exist in a band?

Matthew: Oddly enough Adam is not a drummer and Evan is not a bass player. The instruments they play in TSTMTS aren't their primary weapons. Even when we look at Joe, he's been a drummer in most of the bands he's played in. Ian and I mostly bass. Everything got all jumbled up. It keeps us honest and allows us to work harder. But Evan and Adam--like Adam and Eve/black and white. These dudes came from the same gene pool but are super different. Even the way they learn songs--Evan doesn't want anyone to show him, he just wants a copy in his email so he can figure it out. Adam is more hands on. He wants to sit down, learn it with someone, and then writes it down to take home.
Who knows if they could. I doubt it. It would be fucking incredible, though, and I would love to be part of it.

James: Tell me a little bit about the rest of the band, their personalities and backgrounds in music.

Matthew: Joe is a fuck. Dude picks up an instrument and it's like he's been practicing for fifteen years. I have to bust my ass to try and keep up with the dude. His comic book collection is unreal. 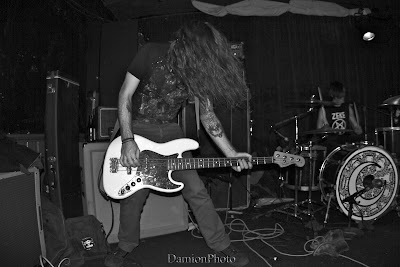 Ian is a fuck too. He's got the higher gamer score than Joe. I don't know where he finds the time to write music between watching reruns of Wrestlemania and playing retro console games, but dudes got volumes of music written. The two of them are compulsive collectors. And i hate collecting. And I'm no good at video games. Rehearsal is always interesting. We've all been playing in punk/hardcore bands since we were kids. I can rattle off tons of bands we played with but most important is here, now. Each of us have super distinct tastes in music that the other one wouldn't be caught dead listening to yet our roots are all the same. Somehow it works.

James: We talked a bit earlier about Buddhism. What was it that initially drew you to the philosophy? How much of it do you apply to your everyday life?

Matthew: Eastern philosophy has always attracted me mainly because it's so different from what I was taught when I was younger. I was looking for something new that I could relate too. All these esoteric ideas really caught my attention. But the more I study it's all very much the same. Look for the good stuff, weed the bad stuff out. Or weed the bad people out. I like using theological ideas, stories and characters and sliding them into songs. We talked about the song Mara//Traitor on We are the Swine which is heavily influenced by the Buddhist demon. And then on Sire it's a fabrication of Ganesha's story. On Mind Reader's Sand and Stone Methuselah from the Hebrew Bible shows up and gives us some advice.

James: How long have you been growing the beard?

Matthew: Turns five in July. That's a long time not to see my face.

James: I bet you get a lot of attention at airports and such? Any stories you can share?

Matthew: Ya know the only place that ever gives me a problem is when I am flying back into the US. My cousin and I were coming back from traveling through Costa Rica and we were "randomly" stopped and searched. Not that good of a story really. They just want to find drugs on us. We smoked it all man! 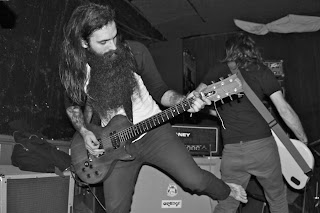 James: That brings me to the feet. Is playing on stage in bare feet just an invitation to disaster? When did you start this practice and why?

Matthew: Story of my life. Really though, if I could I would never wear anything on my feet. I picked up the habit back when The Oval Portrait was on tour. Sometimes I would just feel constricted so I would kick off my shoes. Now it happens pretty much all of the time. It's like being able to stretch out your fingers--feel the freedom. Plus it feels more connected to where I am. The worst thing that’s ever happen is I get really bad cramps in my arches when it's super cold.