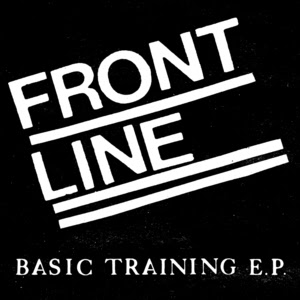 Front Line unload 10 blasts of hardcore/punk fury on this demo tape from 1982 that has finally seen the light of day as 7" in 2012 thanks to Beach Impediment Records. If you are a fan of old school punk / Hardcore then this record is an absolute must.

Here's some more specific details about this release straight from the record label:

After having been in limbo for the better part of 30 years, we are proud to bring you the long lost "BASIC TRAINING" E.P. by Norfolk, VA's FRONT LINE. Commonly known as the "Second Demo" by tape traders over the years, this was recorded in October of 1982 shortly before the band imploded, leading to the formation of BONESAW and eventually GOD'S WILL. "BASIC TRAINING" features 10 tracks of primal and vicious USHC not unlike fellow Virginians WHITE CROSS with whom they shared the stage many times over their brief existence. Select tracks from this session would go on to be featured on compilations like THE MASTER TAPE VOL. 2 on Paul Mahern's Affirmation Records (along side bands like MECHT MENSCH, ZERO BOYS, NO LABELS, and many more) and the legendary all Virginia TARANTULA ON MY COCK tape that guitarist Jeff Clites would release in 1983, but this is the first time all of these songs have officially appeared together the way they were meant to. Raging Southern Hardcore at it's finest.