Sean Favre on his Departure from Meet Pause

Sean Favre's announcement he was leaving Meet Pause came as a shock to many. I was honestly saddened to hear of the announcement, mainly due the fact that Meet Pause was a band I felt I was just beginning thoroughly appreciate and enjoy. Having seen them perform at Clifton's Dingbatz just a few weeks prior I couldn't help but feel a chemistry between the band. It didn't hurt one bit that Sean seemed so sharp and focused at the time. So on the eve of his last show with the band I reached out to Sean to get some answers and insight on the reasons for his departure, his fond memories of his time with the band and what the future holds for this very talented and very likable mainstay on the New Jersey music scene. James Damion

James: You've been the trusted bass player for Meet Pause for some time now. Why the sudden departure? 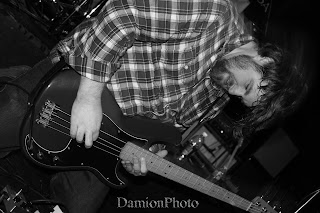 Sean: I felt that, for myself, it was time for me to move on. I haven't given the band 100% for a while now. It just didn't seem fair to me or to the other guys in Meet Pause for me to continue. It has been a hard decision to fully make but I feel like it was the right one and it's what I felt was, and still is, in my best interest. I hope everyone can respect my choice.
I always tried to look at this band as a small business, which it is, but the other half is that this band is a hobby. After awhile, this hobby wasn't fun anymore . Don't get me wrong, I'm still looking forward to playing music privately and publicly. Just for now, it will not no longer be with Meet Pause.
I feel that anyone in Tiny Giant can agree that this lifestyle of playing shows and making original music doesn't bring in the paychecks. We play because we love it, and it drives us. Without that drive the train loses its steam.

James: How did the rest of the band react to your decision?

Sean: The guys in the band were very gentlemanly about it all. No name-calling or any of that petty garbage. They still remain supportive of my decision and show the utmost respect for me.
I wrote up a message that I felt was as professional as I could be for such a delicate subject and action on my part. I posted it to a private group page we use on Facebook so they would all be able to read it one spot. One of my main points to them was that just because I'm leaving this band, doesn't mean I'm leaving our friendships.

James: What made you decide to leave the band through a Facebook message? Wouldn't it have been better to just jump from the van en route to a show? 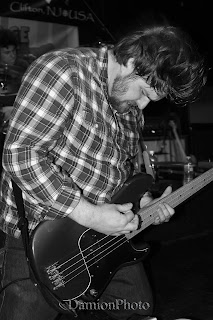 Sean: I had spoken to Keith beforehand the previous day on the phone about it. I had a lengthy conversation the week prior after one of my shows with Keith and Graeme about a lot of the things going on too. Maybe some may think it's cowardly to send a Facebook message, but I felt it was the best choice so I could take my time with writing what I wanted to exactly say in one go, rather than calling each of them up individually and saying a paraphrased version to all three bandmates at three separate times. Plus, I wanted to get it out there rather than sit on my decision because I wasn't going to see those guys for another 4 to 5 days. I included in the message that if they wanted to call me to talk about it, then I would gladly fill them in on the details.
The "Van tuck-and-roll" was definitely an option, but it may have turned into an extended hospital stay...for Scott. (Evil laugh echoes in the night)

James: Did you get your FB message signed by a Notary Public to make it strictly legit?

Sean: The Notary Public wouldn't get back to me in time. I'm trying to have a break-up/suicide note published as an ebook exclusively on Kindle through Amazon. Just waiting on the details due to copyright and publishing restrictions.

James: Where are you heading from here?

Sean: There willy always be different directions I'll be go in. This isn't the last time anyone is going to be hearing from me, "The ole' mighty Sean Favre!". Not many people know that I'm actually a guitar player, as well as a drummer and bass player. I've wanted to play guitar more in a band for some time now and this is my opportunity to write and perform the music that I've wanted to express from my own creativity.

I know how to play guitar, bass, drums, I want to see what I can do with recording all parts with my own vocals over top. Maybe I'll take the Everymen approach having a bunch of my friends be revolving members to play shows with. Maybe I'll find some other musicians/friends to play full-time with. Who knows just yet? I have plenty of time to put things in order, keep contributing to Tiny Giant, and have a good time otherwise.

I'm not fully set on what genre I'm looking at, but I'm sure it will incorporate something with my musical taste in rockabilly, folk, punk, and maybe some of the instrumental side of playing I love. Maybe I'll finally get that one-man Tom Waits tribute band off the ground like I've always dreamed of. (wink,wink)

James: What's the fondest memory of your time in Meet Pause?

Sean: My fondest memory with Meet Pause was when we played the basement of Lucky Cheng's in the city, which is a drag queen bar, and having an almost 7 foot tall drag queen that looked like Lady Gaga walk in.

James: So what transpired when the Drag Queen walked in? Was it love at first sight?

Sean: I was very joyful. It seriously made the night! It's a moment that made time stop. Any lovebird knows that feeling like that moment will last forever, or when he takes the wig off and goes back to being a beautiful man.

James: If you had a choice in the matter who would you like your replacement to be? 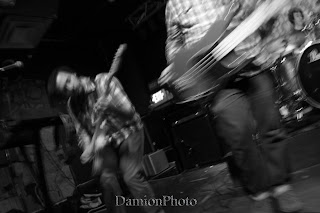 Sean: For a replacement, I would hope the ghost of John Candy would fill my spot in Meet Pause. If that's not possible, then I would gladly like to see Adam Copeland (Black Water/Warface) in there so he could say he's in three bands now.
(I couldn't bare to tell him John Candy is dead. Mums the word on that one…)

Sean: "…pleasure to have in class, a true delight."

James: Being that we're finalizing this after your last show. What do you think you came away with? Was it an emotional night?

Sean: I think I came away with a great foundation for future projects and some enduring friendships, not only with Keith, Graeme and Scott, but with all the people that I know in the audience. It wasn't too emotional, even though I must admit right before doing "Hybrid Moments" my heart was racing a bit and I even added an extra two lines in the chorus because I couldn't remember the first line of the next verse.

I think it was a good send-off for me with the guys in Meet Pause. Like anything that ends, there is always the oppurtunity for something else that comes along the way. I'm at a point where I can do anything I want musically, or maybe I'll take a break for a few months to finish up my schooling and analyze Nirvana songs to figure out how to write the perfect pop song. Anything could happen!

I didn't pop a kidney because then I would've only been down to one. I didn't like the idea of being a freak living with one kidney. I know people wouldn't be able to see it, but it's the emotional hurt I couldn't stand, knowing one of my organs is missing from my body.
Posted by James Damion at 2:28 PM