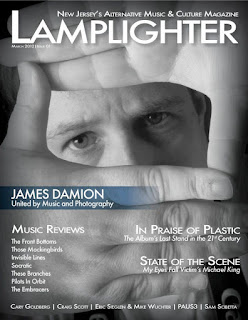 Let's help Lamplighter get printed. I can't think of many print magazines that are out there supporting and reporting on New Jersey's thriving independent music scene. Patrick and Nadia have worked tirelessly on this and were kind enough to make me a part of the very first issue. To say the very least, I feel honored. Here's a chance to make a difference in your community. Even the smallest donation makes a difference. Let's get involved. James Damion

Lamplighter is a Northern NJ-based quarterly magazine that covers alternative music & culture, a heading under which local music, art, poetry, and all alternative culture collaborate, for the purpose of supporting and expanding the local arts scene. The first issue features local photographer, James Damion, among other artists and musicians. Owned and operated by Patrick Boyle (editor in chief), Megan Dermody (managing editor),Nadia Nieves (promotions director), and Dhruvin Dave (marketing director), the magazine has launched a two-week campaign ending March 19th on IndieGoGo to help fund their initial print release of 1000 issues. The $2000 funding goal will cover the cost of printing.

The magazine will regularly release updates about the campaign on their website. http://www.LamplighterNJ.com