Derrick Hachey and I have shared an online friendship since the days when My Space was a relevant internet presence. Over the years we've stayed connected through both mutual friends and a love for Hardcore Music.  So when he contacted me and asked if I could give his band "Olde Ghost's" upcoming EP a listen and possible review I was more than happy to oblige. After giving "If We Ever Get Out of This Alive" a fair share of listens I was rather impressed. So with about a month left before the records release I decided to hold off on the review and send over some questions about the band, the record and the state that seems to have cornered the market on rain. Washington's Olde Ghost are set to release their debut EP  04/14/12 via 1,000 Knives/ Hardcore Maniacs. Be sure to get yourself a copy.
James Damion 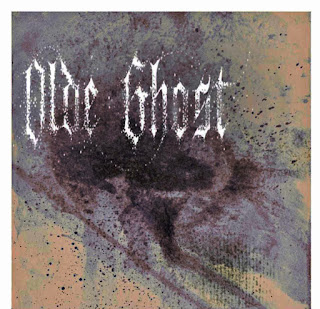 James: The bands been together for a good two years now. Why did it take this long to release an EP?

Derrick: The truth of it is that we are all pretty busy… Sara teaches vegan cooking classes and caters; Chris has a demanding job with Earthcorps; Kirby is a fulltime student and also runs a company with his partner, Anika; Ego is a tattooer and artist; and I have a consulting company. So while we love making Olde Ghost music, it seems to take us longer than most bands to do so.

James: How are you planning to support the release? Will you be touring or just playing locally?

Derrick: Mostly we’ll be playing around locally and regionally in the Pacific Northwest. If there is an opportunity to go out and play some shows with friends beyond that, we would consider it if it fit into our schedules. As a band, we aren’t under too much pressure to ‘move units’ or whatever, which gives us the freedom to kind of do what we want. Mostly we just want to play fun shows with our friends.

James: Tell me about the title. "If We Ever Get Out of this Alive…". It's pretty dark to say the least.

Derrick: It’s a line from a song on the record called ‘For’, which primarily talks about animal liberation activists faced with the loss of personal freedom and imprisonment. The second part of that line, which makes it perhaps a little less dark is “I’d do it all again”, but for the sake of a title for the record we left it off, leaving the interpretation up to the individual in a ‘what If I got a second chance’ sort of way.

James: I just recently became a vegetarian. I'm curious about your status as a vegan. How long have you been vegan and was there an evolution of sorts from  meat eater to vegetarian to vegan?
My reasons for become a vegetarian came from more of a health standpoint. What were yours?

Derrick: I've been vegan for about five years or so, and was vegetarian for about twenty years before that. I'm sort of the newby in the band in that regard, the rest of the band has all been vegan for fifteen years or more. For me, basically, I made the transition from vegetarianism to veganism because I just felt I could do more to alleviate the suffering of living beings. I don't want to contribute to that suffering, and really didn't want to literally injest suffering and more. The transition was pretty easy, and Seattle is a pretty easy city to be vegan in, there are a lot of vegans here, and finding food in restaurants and grocery stores is pretty easy.

James: Over the years I've known a lot of people who were met with a lot of anger, aggression and prejudice over there chioce. More so than any choice over drugs and alcohol regardless pro or con. What was your experience like?

Derrick: I have witnessed and experienced the hostility from non-vegans towards vegans, however. I'm not sure what it stems from...why would anyone care if I, or anyone, don't eat animal products? Does it go against what most people were brought up to believe, in terms of what animal's perpose is? I guess. Most people are taught that cows, pigs, chicken and fish are for eating, dogs and cats are for pets, and so on. When that is challenged, I guess people become uncomfortable and lash out. Maybe it's born of guilt in their own dietary choices. I really don't know, but i do know that there is nothing anybody can do or say to get me to eat or use animal products.

James: When you decided to form the band what were you looking to accomplish? Was there a particular message or mission statement you wanted to put out there?

Derrick: Honestly, we weren’t (aren’t) trying to accomplish anything. The reason we started the band was because we are all friends, and wanted to make music that we love with none of the pretense that normally goes along with being in a band, like we all did in high school. No drama, no trying to ‘make it’.
As far as a message is concerned, we believe in total liberation for all sentient beings. No humyn or non-humyn animal should be oppressed or forced to live in servitude to anything or anybody. Racism, sexism, speciesism, homophobia…they are antiquated concepts that have no place in any society. 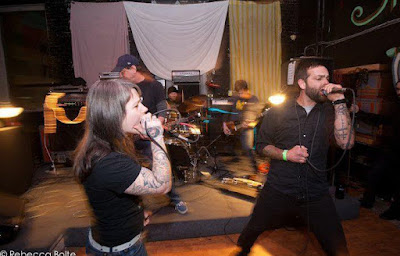 James: I really like the vibe of the male/female vocals. They definitely compliment each other. What went into the decision to go with two singers?

Derrick: Chris and Sara have sung together in previous bands, but not in a co-frontperson sort of way. We thought the dynamic and duality of it really added to our songs, and would allow us to have this whole different layer we wouldn’t have otherwise.

James: Was the male/female decision a conscious one or did it just happen naturally?

Derrick: It was really just a natural thing. We had a song early on that we thought would be better if Sara sung some back-ups on, which she did. It sounded great, so it just sort of happened…she was our friend, and feels the same way about political issues as we do. Plus, she has an amazing voice.

James: Listening to the EP I got an immediate 90's vibe. i can't quite put my finger on it but it brought me back to a time when there was a lot more going on than just a band writing Hardcore breakdowns. I felt a certain urgency about it. What are some of the influences musically and personally?

Derrick: That’s great to hear! You know, we’re all a little older, and came up in a time when it seemed hardcore was more than hitting the pit, so that type of influence can be heard through most of our songs. Bands like Swiz, Verbal Assault, Soulside, Embrace and Black Flag are a huge influence on us, along with revolution summer era DC bands, and newer bands like All Teeth, A Better Hope Foundation, and Run With the Hunted.

James: You always hear about how depressing and shitty the weather is in Washington. Yet, anyone I've known that has lived or travelled there loved it and considered it a very special time in their lives. What's your take on that? I heard it rains twelve hours a day. The other twelve are devoted to fog.

Derrick: Haha! We just tell people that so they won’t move here. Seriously, I moved here from the East coast about 15 years ago, and instantly fell in love with the Pacific Northwest. Seattle is such a special place…so clean and beautiful. All the rain just makes the sunny days that much better.  That said, as I type this it is pouring out…I’m ready for some Spring.

James: Olde Ghost does a lot of work in its community. What are some of the project and causes you're involved with?

Derrick: There’s a few things we do, either through playing benefit shows or volunteering time. We’ve helped out organizations like Precious Life Animal Sanctuary, which was founded in September 1999 by Ralph & Caryl Turner, who have been actively involved in local, state and national animal protection issues their entire adult lives. We’ve also helped out The CAIR (Community Abortion Information & Resource) Project, which is a 501(c)3 non-profit social service organization dedicated to removing barriers to abortion access, and many others. We also play benefit shows to support Pasado’s Safe Have, One Hundred For Haiti, as well as the work our friends our doing at the DIY music space Black Lodge here in Seattle.

Derrick: Well, without sounding too much like a history lesson, The Pacific Northwest has always enjoyed an extremely vibrant underground music scene. Going back to bands like Brotherhood, Christ on a Crutch, and The Accused, through bands like Undertow, Champion and Trial, up to the present with bands like Cowardice, Erode, Cynarae, Outlook, Dead Weight, and so many others. We’re really fortunate that so many people make the choice to play music and support bands and venues. Because of all that, so many national bands find it worthwhile to make the trek up here to play. Even if they didn’t, it really wouldn’t matter…we can make our own fun.

James: I always talk about leaving things better than you found them. Leave a positive footprint on the places you've walked. Something that seems to be a constant uphill battle where I'm from. Do you think bands/musicians have a responsibility to their community? I mean, "Your just a fucking band.".

Derrick: Bands have no responsibility to anyone or to do anything. They are free to do whatever they choose. Whether it’s to write songs with pit calls and breakdowns or songs about animal liberation, or if they want to wear bear suits, or whatever…their choices and responsibilities are only to themselves , because yeah…it’s just a fucking band.

James: What are you looking to accomplish with Olde Ghost?

Derrick: Really, I just want to have fun and make music I love with my friends…play some shows, and maybe get people to think about how they treat other people and animals, and the planet we all inhabit.

Reverb Nation Page
Olde Ghost on Facebook
Posted by James Damion at 9:03 AM

Email ThisBlogThis!Share to TwitterShare to FacebookShare to Pinterest
Labels: 000 Knives, 7 inch, EP, Hardcore, Hardcore Maniacs, If We Ever Get Out of This Alive, Interview, Olde Ghost, Pacific Northwest, Punk, Straight Edge, Vegan, Washington