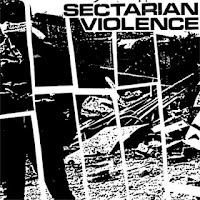 The band Sectarian Violence serve as a sort of United Nations of Hardcore boasting members from Sweden, The UK and Washington DC. On this self titled 7 inch the band plays some of the best straight up Hardcore i've heard in quite a while. For someone like me who's become somewhat bored with Hardcore lately, this has been a total refresher course on a genre that once moved me.


Sectarian Violence play lightning fast Hardcore with breaks that will have you forming a pit no matter where you are. There were distinct moments when I felt as if I was at a Breakdown show at CBGB's in the late 80's. With each of the six songs being delivered in well under two minutes one might wonder how they could possibly make a lasting impression but I can assure they left one on this listener. Fans of fast, loud and relentless Hardcore bands like Life's Blood and Breakdown will love this record. Fans of Sectarian Violence will be thoroughly rewarded.

The band is just weeks away from embarking on a European Tour. I really look forward to hearing about it while hearing more music from these guys. The record is available Grave Mistake records with a limited pressing of 1,000 copies. James Damion