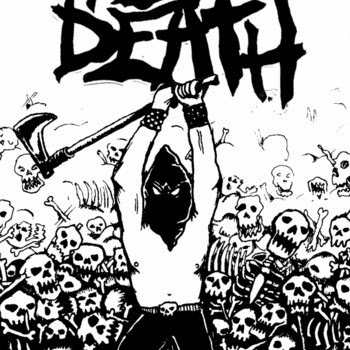 Though still a band in it's infancy. Red Death's personnel read like a local directory of who's who in from some of the areas best Hardcore outfits.
Featuring members Zoom, Intent, Future Binds, Abuse, Protestor and most notably, Coke Bust. The band, all of which share a house outside Washington DC, bring somewhat of a lifers element to the game.

On the bands first demo.
Red Death offer four songs of fast and brutal Hardcore that finds influences in standout acts such as
Corrosion of Conformity,
The Accused, Discharge and even The Cro-mags.
'Already in Hell', 'Disfigure', 'Unholy Agony' and 'Perpetrator' are delivered with quick, angry and downright savage results . With songs that barely make it over the one minute mark. They leave no time for breakdowns and no room for the light of heart. Whenever I feel myself drifting from my Hardcore roots. They're comes a band that pulls me back in and allows me to appreciate the past while helping me to realize the future still lies ahead.
Red Death did just that. Though the band wont be getting any scholarships to art school. (Note demo artwork.) Red Death more than make their mark on Hardcore's ever growing landscape. The demo, now available on Bandcamp is just about the cassette treatment from Flophouse Records and tapes. James Damion

Flop-House Demo
reddeathdc@gmail.com Band
B9 Board  Download
Posted by James Damion at 9:52 AM