Looking Back; An Interview with New Jersey Hardcore Legends Underdog

Underdog got their start like so many Hardcore bands at the time. Through a conversation between two friends outside CBGB’s. Richie (Youth of Today guitarist) and Russ
(an original member of Murphy’s Law) were the glue. They named the band True Blue before ultimately changing it to Underdog. In 1985 they released their self titled 7 inch on
New Beginning records. The four song EP became an instant classic and sent a strong message that mediocrity would no longer be the norm in the genre.. Their full length
“The Vanishing Point” still stands as one of the great musical  achievements of it’s time. Mixing Hardcore with accents of Reggae and Dub. Lyrics ranging from the personal “Vanishing Point” to the sociopolitical “No Matter What”. They were one of those incredible bands that in a sense stood out and transcended the genre. I interviewed the band outside of CBGB’s after what would be Arthur Smilios’ (Gorilla Biscuits, Token Entry etc.)

last performance with the band. Looking back I realize I did a pretty shitty interview that day. Take into consideration I was high as a kite when I did this. Not the smartest thing to be when you’re about to interview one of your favorite bands. The interview would appear in the first issue of Unite. James Damion 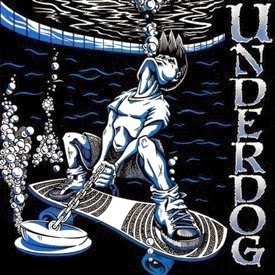 James: Why is Arthur leaving the band?

Arthur: (shrugs) Why is Arthur leaving the band?

Russ: Like the guy on the oatmeal commercial says, “It’s the right thing to do.”.

Arthur: The truth is I don’t know.

James: Can you tell me about the recent tour you went out on?

Richie: We did a tour with
Agent Orange and Scream across the country to California. We played in Tijuana with Soulside. Some of our best shows were in Green Bay, Chicago, Kansas City.

Richie: We just started in the Mid West. Went to the West Coast and played a few shows on the way back. It was kind of an abbreviated tour. 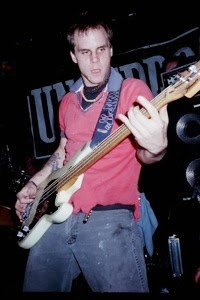 James: Do the scenes out there differ much from here in New York?

James: How many songs do you have in your set now?

James: Are you playing any covers?

Russ: We haven’t played in a while but it usually varies. We’re going to come up with some new ones. We used to do a Negative Approach cover. Today we did Pressure Drop by the Clash.

James: I heard you had a record deal and a new album on the way.
What's happening?

Richie: The record label was supposed to be bought out by another record company and it didn’t happen so they folded. We’re talking to a lot of labels. Our future plans are to just record the album. It’s going to be called “Over the Edge.” 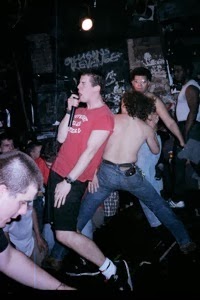 James: How did the show go for you today considering the bouncers were controlling the stage and not allowing people to stage dive?

Richie: I’ll tell you something. Even after all that happened today, Dennis (infamous CBGB’s bouncer) came up to me and said that we’re his favorite band. He thinks we’re great and he wants a copy of our live off the board tape. He’s not as bad as everyone thinks he is. The bouncers were a little bit better then they have been in the past. No one got punched or anything.

James: From your experience touring, how would you compare the issues with violence at shows with that of New York City?

Russ: I’d say that other towns have a bigger problem with violence at shows than we have here.

James: How has the band changed since the seven inch?

James: I heard Ernie Parada (Token Entry) was playing with the band for a stretch. How did that go?

Richie: He just filled in for a couple of shows. He did a great job.

James: What ever happened to your old drummer? 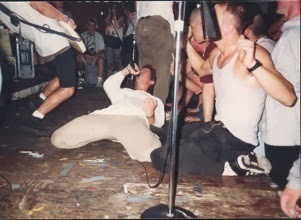 Russ: He moved to Florida. He’s in a band called the Doldrums.

James: What bands and styles have had the most influence on Underdog and your sound?

Richie: It’s really hard to answer that question. We’re into so many different types of music.
There’s really no handful of bands we can mention.

James: What situations influence what you write and sing about?

Richie: I try not to get too specifically political. I write songs about whatever is disturbing me. Whatever is moving me or inspiring me. Each song is completely unique.
They’re not written to any specific format.

(At this time Uncle Al from Murphy’s Law sticks his head in to say hello. A strange sound creeps up from Russ’s belly to his throat and makes the van smell of sausage and beer.)

James: What’s next for Underdog.

Richie: I don’t know. Let me look into my crystal ball.

James: There have been a lot of rumors circulating that your breaking up.

Russ: No, we’re just going to record our album.

Foreward; Underdog still play the occasional show. Richie has reformed Into Another.
While Russ fronts the band huge. They both have a show at Brooklyn's St. Vitus.
The bands anthology 'Matchless' and their self titled 7 inch are available at Bridge 9 .
Go scoop it up. James Damion