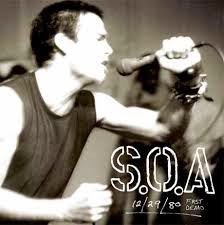 This spring, Dischord will release S.O.A.’s First Demo 12/29/80. This 7” collects the eight songs that the band recorded with Skip Groff at Inner Ear during its first studio session.

Henry Garfield formed State of Alert (S.O.A.) in October of 1980 with guitarist Michael Hampton, bassist Wendel Blow and drummer Simon Jacobsen. The band released 13 songs – three on the Flex Your Head sampler and ten on the
'No Policy' EP – and performed a total of nine shows before splitting up in July of 1981.