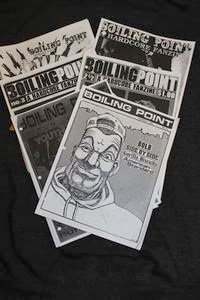 When I started writing the first issue of Unite in 1988. I had more than my share of inspirational building blocks and blueprints to ensure that my own endeavor would't fall flat on it's face. Guillotine, Schism, Smorgasbord, Yes Zista and many more had their hand in shaping what became the first and second issue of Unite would look like and even feature.

Imagine my excitement when each of the reprinted six issues showed up on Big Carte just weeks after initiating my search to track down the same issues of Boiling Point I sold on Ebay nearly fifteen years before.

Gone are the colorful covers. Gone are the thick as cardboard pages.What twenty six bucks got me was each of Boiling Points six issues hastily xeroxed on cheap, flimsy, white copy paper. Each held together by a single staple. Though the content is exactly what we saw in those original issues,the cheap quality of the paper and the scans don't come close to accenting or giving proper respect to the great layouts and photos contained in Boiling Point.
Though it's good to look back on many of the old reviews, interviews and correspondence. It's a shame they didn't take any care whatsoever to pay tribute to just that. This seems to be a very short and limited run on Big Cartel, One that will hopefully save you some money in the end. Though it was exciting to look back at a great fanzine from my time. I probably would have been happier tracking down the original copies. These don't seem worth the price in postage.The advertisement mentioned bonus material. I didn't even get a note.
File under "Half Ass". James Damion
Posted by James Damion at 11:44 AM