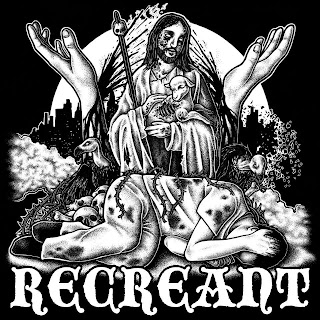 When asking Tampa's
Andy Stern of the Feral Babies if he would refer me to any of the up and coming Florida acts worth checking out, he almost immediately put me on to the Sunshine State's swampy Recreant.

Upon listening to the sludgy brilliance of the LP's opener 'Rick Scott is an Evil Robot'
I felt as if I was being introduced to a south of Savannah version of Kylesa. That may have been true but with the overall diversity and excellence of the seven songs that followed, I heard influences and reminders of acts such as Portraits of the Past, Reversal of Man and Dillinger Escape Plan. All of these while really getting the feel for a band that is just as comfortable and at home in it's own sound.
Songs such as the epic  'For all the Grief You've Caused us, You should Slit our Throats',
the punishing 'After the Apple' and the chaotic 'Modern Day F Word' help to make this an inspiring release. Thanks to Andy for putting me on to this. Your good taste in music should be noted. James Damion