After witnessing Bloomfield New Jersey's IDES decimate the already shaky foundation of Montclair's Meatlocker,  I was eager to get my hands on any of the bands physical or digital output. Upon hearing the two tracks 'Invisible Burdens' and 'Megalodon' 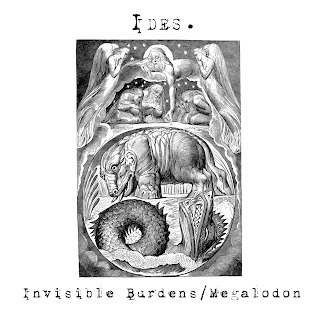 I found myself wanting to dig for more, a job made easy as an earlier five song demo sat on their Bandcamp page just waiting to be heard.
Considering how difficult it is to gauge a bands overall sound and approach from a mere two songs,  I'm combining the bands earlier five song demo with the Invisible Burdens / Megalodon release.

With expressive vocals that are just as chaotic as they are expressive, displaying power and an emotional depth you don't often hear in the genre today. Musically, IDES provide enough Unwound like dissonance to knock everything off it's axis while creating something that works on an overall scale. Overall, 'Trust' with it's devilish rhythms and impassioned vocals and the absolutely killer 'Invisible Burdens' are my favorites. IDES make some real noise on these tracks...Leaving these damaged ears eagerly anticipating more. Let's hope the band doesn't keep us waiting.
James Damion