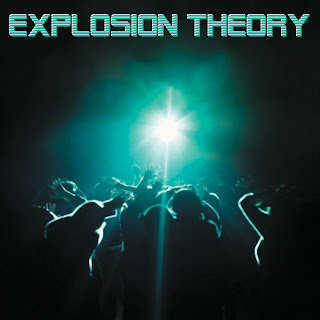 New York City's Explosion Theory is a three piece featuring Maurice Vega,
Peter Harrison McWhinney and
Dino Sex. Each formerly of the long running indie rock band Accidental Tribe.
While separately performing in acts such as NYHC's
Under Pressure and alongside the legendary G.G. Allin.
The band features elements of Rock, Jazz, the Blues and yes, Hardcore.


The seven song EP opens on a high note with the instrumental 'Looking in from the Outside' highlighted by it's lush leads and funky jazz inspired rhythms. It serves as a welcome mat as to what's to come.
'Interference' follows taking the listener out of their comfort zone with it's hardcore assault. Mixing highly elevated musicianship with primitive Bad Brains meets Cro-mags vocals.
The closing track and personal favorite'Over' features Jae Monroe of thE influential NYC Punk band A.P.P.L.E. on vocals. Thus perfectly closing out one of the most surprisingly inspiring records of the year.

What makes Explosion Theory really stand out is their musicianship and song crafting ability that allows them to fuse so many different styles of music without ever coming off as muddled or confusing. It's a genre-defying style that can be both an advantage and a detriment depending on how you look at it. For me personally, Explosion Theory is Hardcore for the musician minded Hardcore fan. James Damion

Explosion Theory  Get it Here