Volatile Substance - Soak My Blood in Gasoline, Bathe Myself in Fire 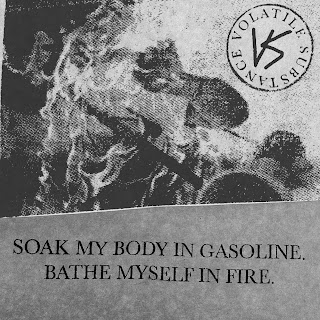 As far as new bands go, Oakland California's
Volatile Substance is about as new as they get. Having formed in June of 2013 the band quickly recorded their four song demo
'Soak My Body in Gasoline, Bathe Myself in Fire' less than two weeks later.

Volatile Substance seem as determined as a terminal patient given just months to live on their hastily recorded demo 'Soak My Blood in Gasoline, Bathe Myself in Fire."
Volatile Substance unleash four songs of very fast, raw and mediocre Thrash Hardcore that's thankfully over and forgotten in just under the six minute mark. Though there are some pretty cool leads and broody rhythms within, the vocals are at most unbearable.

Perhaps with a little more seasoning and a more paced approach Volatile Substance could have had better results. Unfortunately, this demo didn't do much to warrant further listening or investigation.
James Damion

Email ThisBlogThis!Share to TwitterShare to FacebookShare to Pinterest
Labels: Demo, Hardcore, Soak My Blood in Gasoline Bathe Myself in Fire, Volatile Substance