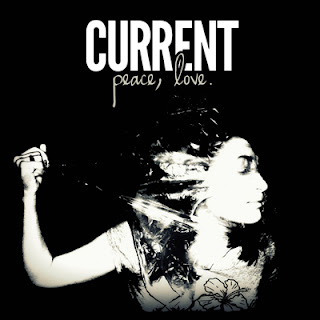 Current's seven song EP 'Peace, Love' is an excellent mix of mid to fast paced Hardcore with intelligent lyrics and some impressive guitar shredding. The band  fires through seven songs in under fourteen minutes with good results. The lyrical content is intelligent and is carried by some tight vocals.  The band hails from Syracuse, NY which has been a hot bed for Straightedge Hardcore since Earth Crisis decided to walk the plank with their Metallically influenced take on things.
I got a serious Bane vibe on these tracks which is pretty awesome considering how much I love that band. Upon further listen I  began to get a John Joseph a la his Both Worlds output.

Though Current is a relatively new band they feature former and current members of Meltdown, Forfeit, Unholy and Supreme. Regardless, they seem to have a bright future ahead of them. James Damion