I've really been slipping when it comes to my show attendance. Finding more excuses to stay home and just listen to records or work on other things. No matter how much I love going out to  check out bands, bump in to some friends or better yet, make new ones.
The body and the mind need a change of pace sometimes.
Fast forward to last week when Jersey Beat's Jim Testa asked if I'd like to cover a night of Rock n' Roll at Maxwells. It was a nice night and the opportunity to stretch my legs and do a little experimenting with the camera was a good enough excuse to head out.

Toms River native sons Ba Babes open the set and really helped to get the night off to a good start. Great Rock n Roll with a Garage vibe that had a nice driving edge. The set was short yet memorable. They've got a bunch of shows down in Asbury Park, Red Bank and Toms River towards the end of the month and will be heading down to Maryland in May so catch them if you can. Ba Babes Blog

Black Wine followed and the Jersey trio did not disappoint. Playing an impressive set of  kick the tires and light the fires Rock & Roll. Jim Testa had mentioned the band to me on numerous occasions so I was really eager to hear what he was talking about.
The band features Jeff Schroeck of The Ergs and has several releases under their belt including the self titled debut and 2011's 'Summer of Indifference'. You can go download their stuff here at their Bandcamp. Black Wine

By the time Black Wine finished their set I was content and for the most part, ready to head home. Lucky for me I stopped myself and decided to see this thing through to the very end. I'm really I listened to that voice in the back of my head because Liquor Store brought the testosterone to another level. As the night had progressed the level of energy kept rising higher and higher and these guys really put on a show. The Jersey band is all rock bombast and swagger. Something you have to see in person and let wash over you. Liquor Store

As the night began to wind down and I readied for the nights headliner Natural Child I got into a conversation with a woman who sounded like she might have a promising future as a public relations or advertising guru. She talked up Natural Child as if they were the second coming of Christ. "They're really big right now and they're about to be huge." "They're going to be out on tour for a Really long time." "Think Country meets Classic Rock, The Blues and Sabbath." Now I'm no shit farmer but I know when someone's trying to sell me a truck of  horse manure. No offense to anyone but I kinda like to let people's recommendations blind my ears. Nashville's Natural Child took about half their set to convince me they were any more than a random touring band sweeping through town. The Country/Classic Rock influences were immediately apparent but the muddy bluest Sabbath didn't show itself until much later. I'm still kind of on the fence about these guys but will take some time to check out the disc that lovely lady handed me. All in all it was an excellent night. Busy Child 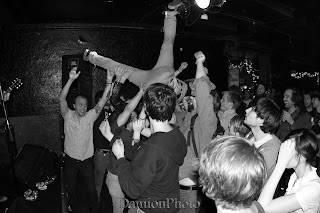