Down To Nothing - All My Sons 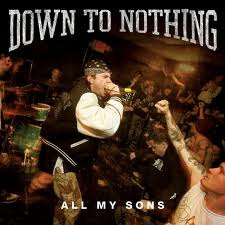 Richmond's Down To Nothing have been a favorite of mine since first hearing their album 'The Most' on Revelation Records in 2007. The band has always struck me as somewhat of a blueprint for the what I love most about Hardcore. The band is heavy but doesn't tend to get too Metal or venture into the tough guy elements that often plague the music. The band has always incorporated a big guitar sound featuring lots of breakdowns and positive, uplifting lyrics. The band has this natural aura about them that always feels natural and unforced. It's as if they've found a niche they feel comfortable in and they don't feel a lot of pressure to stray far from what works for them.

This is Down To Nothing's first release on Reaper Records, with previous offerings  coming on Thorp and the aforementioned Revelation Records. The four songs featured on
'All My Sons' will satisfy any fan of the band or Hardcore in general. Although it's always good to see a band grow and change from record to record. It's also refreshing to find one that delivers consistently excellent music without straying too far from it's original direction and message. James Damion

Email ThisBlogThis!Share to TwitterShare to FacebookShare to Pinterest
Labels: All My Sons, Down To Nothing, Hardcore, HXC, Reaper Records, Record Review, Richmond, Straightedge