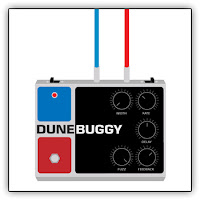 Dunebuggy were a 90's indie rock band who hailed from Hoboken NJ and featured one future Dahlia Seed member Jon Procopio on guitar and vocals and also featured some guest vocals from Tracy Wilson who would later join Dahlia Seed as their full time vocalist.

Dunebuggy play quirky yet infection indie pop with hooks that will get stuck in your head for days, just give the albums opening track "Humdinger" a listen and I promise that you will have the chorus stuck in your head all day long. If you are a fan of the Lemonheads, Pavement or Archers of Loaf etc then I would urge you to give this record a listen and buy one before they are gone as they're limited to a meager run of 100 copies on white vinyl...Dave G.

Born of suburban boredom, the D.I.Y. aesthetic of skateboarding, and an obsessive appreciation for well-crafted pop tunes, Dunebuggy had the great fortune of being part of the inspiring New York City music scene of the mid 90's. What started as a duo of friends (Keith Renna and Jon-Michael) butchering cover tunes by their favorite punk bands, evolved into an original power trio with the addition of bass player Michael Reilly, and was occasionally complimented by vocalist Tracy Wilson (Dahlia Seed).

Drawing a heavy influence from both the Boston music scene(Lemonheads, Pixies, and Blake Babies) as well as inspiration from legendary bands such as the Replacements, Sonic Youth, Minutemen, and the Pretenders, the band focused on becoming a tightly knit unit intent on creating clever indie rock with pop hooks.

Dunebuggy's sound is punctuated by quirky phrasing, angular guitars, and imaginative lyrics. The bands goal was always to put the songs first, doing what was best for the them as a whole, and attempting to craft short works of pop perfection with a healthy dose of experimentation. Hard hitting, inventive drumming grounds the entangled and intertwining bass and guitar work. Indie pop, heart on the sleeve songs are shrouded in lyrical intricacies and cryptic prose.
Posted by Dave G at 1:20 PM