When I caught wind that Baltimore's Deep Sleep were playing a show in New Brunswick NJ, I almost immediately shot a text over to my partner in crime Dave to see if I could will him off the couch to go see one of our favorite, current HardCore bands. Though Dave is always up for a drive to the moon to dig for records, it's a rare occasion when I can get him to drag himself to a show.

As we arrived at the non de-script house in any street New Brunswick, we noticed a small gathering of Punks and HXC kids gathered outside. It brought us both back to the days when house shows were more prevalent and it felt as if every New Jersey basement was filled with kids, a roster of bands who were to later become legends and a table with records that were sold slightly below price. 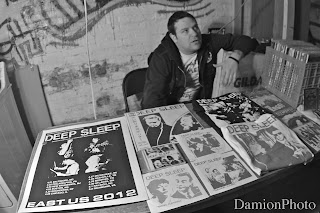 As we opened the cellar doors and walked down into the cold concrete fortress we felt an immediately good vibe.
Absent were the pertinacious nature that goes along with a lot of shows these days.
Pushing past the mattress that served as both a door and noise insulation were we caught Radio Exile in mid set.

The set was sharp and the attending crowd seemed to enjoy every note. As the band finished up and the crowd dispersed in different directions the space opened up to a merch area and some couches next to a spray painted wall that read "R.I.P. Court Tavern" a stark reminder of the clubs recent closing. Dave and I headed over to the table which was manned by Deep Sleeps frontman Tony. 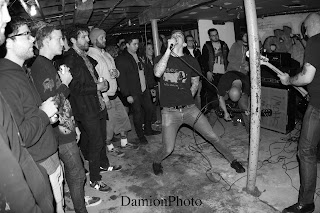 We were all settled in by the time Real Cops started there set. I made my way to the front of the crowd to get an up close look. The band tore through a ripping set of Hardcore that had both me and Dave grinning from ear to ear. There was a certain loose dissonance about their sound that we both found appealing. Thoroughly enjoyable on all levels.
They really brought me back to some of the things I loved about HardCore in the 90's. After their set Dave almost immediately headed back to the table to grab a copy of the bands demo. You can check out his review right Here, Later that night I spoke to their guitarist and singer and found out they were located nearby in Jersey City. I definitely look forward to seeing them again. 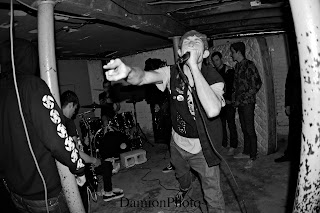 When I asked the host about the following band he told me they were a thrash outfit and that they'd probably play about fifty songs during their ten minute set. Looking back,
I think he was right.
Attitude Era took about five times longer to set up than they did to actually play. Once they did play it was total chaos with the singer and guitarist throwing rolls of oversized toilet paper and launching into the crowd repeatedly. It was hard to contain their energy or noise in the small space. Within a few minutes of screaming, jumping and pouncing, it was all over. Once again we thought, "In the time they set up and broke down they could have toured on that set. 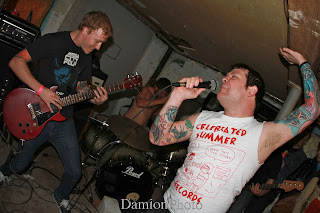 I think it's needless to say we were really there to see Deep Sleep. I first heard the band about a year ago through Dave on one of record store recons to Allentown and have been catching up since.
The Baltimore based band has become one of if not our favorite Hardcore act playing today. Knowing that they were finally coming to the area created quite a bit of excitement for these old men. 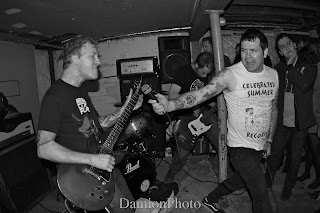 As the band was plugging in I gave the bands guitarist Nick some well deserved praise on his awesome Mega City Four shirt. It seemed to really make his day that someone just might like the band as much as he did. Here I am standing there waiting for this band to put me in to orbit and instead of worrying about his tunage or feedback he's having his day made by some dude who shares his love for things like MC4 and the Doughboys. Unreal!!! Suddenly it all came to that moment. Tony had fixed the issues he was having with his mic and it was blast off.  I was in fucking orbit. Lately I've really been letting the music completely wash over me and not let any shyness or rhythmic issues stop me from rocking the fuck out and having one of my favorite bands go nuts less than a foot away from me brought on the possession. 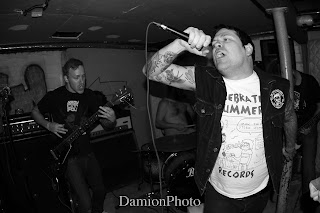 Deep Sleep have an amazing energy and made a quick and lasting impression on the crowd. HardCore can often get way too serious with it's subject matter, testosterone driven sound and tough guy image but this was a band that were there to have fun and they looked as if they had a ton of it.
The huge Descendents influence didn't hurt one bit.  Everybody was on point on this particular night and we felt lucky to be a part. 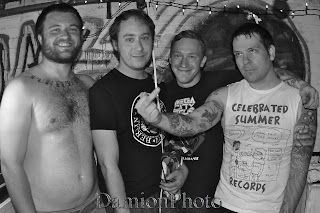 As we were about to leave we loaded up on records and tour posters. Before I could head out Nick grabbed me with a smile and said his proper goodbyes while handing me some tapes from his side project Kent State. I'm going to go listen to them now and let you know what I think. Until then, check out some Deep Sleep  Here .
James Damion
Posted by James Damion at 11:25 PM