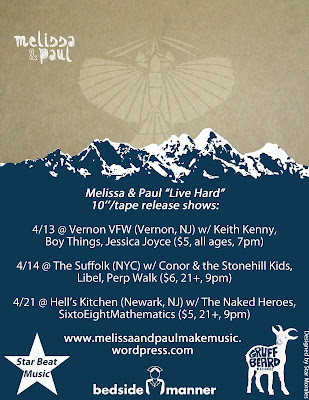 "Live Hard," Melissa & Paul's follow up to their 2011 debut, successfully fuses punk and blues with a touch of garage. Melissa's vocal performance lends itself to greats like Nancy Sinatra and Patti Smith and she would fit nicely with the '90's Riot Grrrl wave. Melissa & Paul fluctuate between a Screaming Females-esque sound and a "reverse White Stripes" yet not-so minimal vibe, while paying homage to greats like Hendrix and Nirvana. The 6-song EP sounds natural on tape and vinyl as the lo-fi and grainy sound compliments Melissa & Paul's raw and energetic performance that they actually did record in a garage

"Live Hard is about doing things instead of just talking about doing things," drummer Paul said. With that said, this summer Melissa & Paul will be touring the east coast/midwest with Boy Things and the west coast with Dead Ringer. But before that you can check out the band's record release shows coming up in mid-April.

Melissa and Paul  Wordpress
Posted by James Damion at 9:32 PM