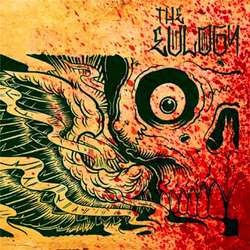 set on making a record that sounded like Agnostic Front meets Madball.
While the bands sound seems to follow the lead of the members former bands.
The Eulogy definitely swim in the Metal end of the Hardcore pool.
The EP's 3 songs Pummel, No Matter What and The Plague do nothing to distinguish them from any other Metal Core bands that might have done the same thing in the 90's.

My only curiosity about this record lies in why a band that plays Metal and exclusively features members of East Coast acts considers themselves a Southern California Hardcore act. Did they decide to rent a place together near the beach? Was it a one year lease with an exit clause?
Let's hope this doesn't start a trend where NYHC starts outsourcing it's band members to other states. We may never recover. James Damion

All In Merch  Purchase
The Eulogy  Bandcamp