My decision to give Police Brutality a shot was based entirely on nostalgia. Having secured a copy of the original demo through an elaborate tape trading network back in the late 80's. The name rang a somewhat familiar bell. Thus bringing back a series of good memories from the time. Being fully aware of their guitarists current Hardcore band Killer of Sheep only added fuel to my curiosity. 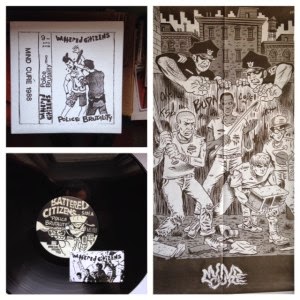 The albums cover features the original cassette inlet and artwork boldly displaying just what the bands name and demo title infer. The raw, stark artwork and the covers overall it's D.I.Y. feel draw the eyes in.  Included with the record is an amazingly detailed two sided fold out poster the includes numerous images, show fliers and detailed liner notes that vividly tell the bands story.  For added sentiment, Mind Cure Records includes a free download code that, along with the 12 song demo, features two live sets from the band. I haven't even gotten to the music and I'm already thinking this was a good acquisition.


However, it wasn't until the needle hit the record, that my feelings began to quickly change. Maybe this one wasn't what it was chalked up to be. While the topics are just as relevant today as they were during the time of it's original release. The songs themselves haven't held up over time.  Taking into consideration this demo was recorded more than twenty five years ago is one thing. However, it's hard to imagine these songs being considered anything more than primitive, elementary and generic in their day.  And while fans of the band or those connected to Pittsburgh Hardcore in the 80's might enjoy it's nostalgic value. I would be quick to point anyone in the Killer of Sheep.  James Damion