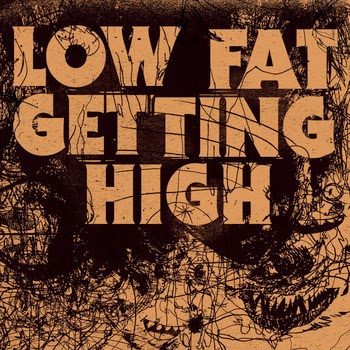 While I won't kid you in saying
I have any idea what the name Low Fat Getting High eludes to. I will say that this is some of the best stuff I had the privilege to get a hold of as year 2014 came to a close. Having heard so much praise thrown upon this Brooklyn band in the last year or two. I was beginning to wonder if the hype machine had gone into overdrive. That was until I managed to get hold of a copy of the band's previous release 'Bad Yoga'. Those four songs were all the convincing I would need.

So when the band offered to send me a copy of their new LP.  I was more than willing to accept.
Raw, heavy and flat out noisy. This record makes me regret not posting a best of 2014 list on the blog this year. The self titled LP, which features twelve sonic tracks of post noise grunge rock validate all of the buzz that's been building around this band. While comparisons to grunge pioneers such as the U-men, Green River and Mudhoney can easily made. Perhaps a nod to Queens of the Stone age might suit those with short term memories or ones without music history degrees. Regardless of any genre specifications or trappings. I wouldn't go suiting up this Brooklyn trio in matching flannel attire anytime soon. Low Fat Getting High are perfect for what they are. Loud, raw and honest sounding. Overall, some of the best stuff out there. James Damion

Low Fat Getting High Get it Here
Posted by James Damion at 12:05 PM