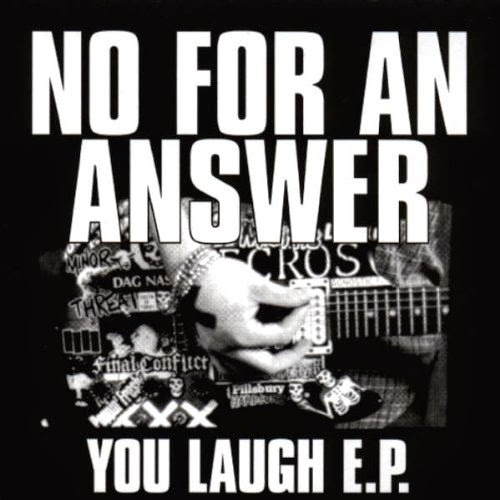 While I don't make it a habit of reviewing reissues or represses of old records. This particular slab of vinyl shook the memory tree enough to warrant a few words. At the time it was released (1988) on Revelation Records. Hardcore had become my life's blood.

When Dan and No For Answer dropped their bags at the SXE house in preparation for the Free For All show and album recording at CBGB's. I took some time to interview them for the second issue of Unite fanzine,

I don't know why, but I did not think these songs would hold up well.  For as much as I love 80's Hardcore.
A lot of the music I listened  to back then has not aged well. Time just has a way of aging a record, a song or even a memory. Listening to this E.P. for the first time in close to twenty years immediately brought back a flood of memories. How, at the time  we waited forever Revelation releases with bated breath. Regardless of familiarity, you know that the latest release was going to satisfy your thirst for excellence. The release of No For An Answer's You Laugh was no joke. Powerful, smart straight edge Hardcore from California that  had a message and a purpose. Add to it an iconic cover image that brought to mind earlier bands such as SSD and DYS.

All these years later, the songs still hold up. The message still matters and the music feels as powerful as it did decades ago. Just Say No, You Laugh, When will it End, Liar and About Face were pleasing to hear again. Leaving me with the hope that their follow up A Thought Crusade will soon make the reissue rounds. Fans of band like Insted, Chain of Strength  and Unity take note. This  one's for you. James Damion

Rev HQ Get it Here
Posted by James Damion at 8:56 AM