With the overwhelming amount of music we acquire on a weekly basis. It's become nearly impossible to gain a sense of intimacy with an album the way I used to.
That was until 'Groping For Luna' showed up in my mailbox. 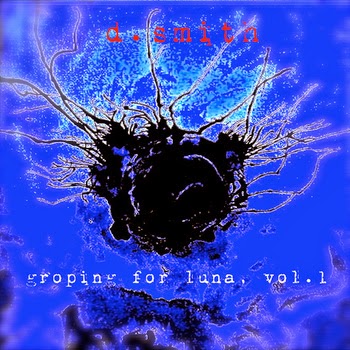 On perhaps one of 2014's most surprising, out of nowhere releases of the year. D. Smith (Known to many as Dan Smith of Shirk Circus/The 65's)
gifts us sixteen songs that  give the singer songwriter bit a healthy kick in the gut.

'Groping for Luna Vol. 1' puts excellent songwriting, as well as a knack for storytelling in the spotlight. Each song shares a raw, honest and unflinching quality that is both haunting and real. It's hard to imagine songs that have this sense of darkness can also feel so beautiful and eloquent.

From the muscular rock of Worst Case Scenario to the more restrained, folky
The Ballad of Squeaky Fromme. Smith approaches each song with enough grit, honesty and sin to earn the respect of anyone with  a soul to put on display. There were moments here where I felt Smith was channeling the great Bob Mould.  That somehow, there was a lost Husker Du album waiting to surface. From start to finish Groping for Luna felt like a record worthy of a sequel. Here is a record that makes me recall the days when an album, not just a song, but an entire album stuck with you and made for a conversation starter.
Not to be missed or overlooked. With the beginning of Al Crisafulli's Sugarblast Music..This very well might be the last we here from his long time label Dromedary Records for a while.
If that's the case. Dromedary may have left us with it's best release to date.
James Damion

Dromedary Records  Get it Here
Sugarblast Music  Also check out
Posted by James Damion at 4:58 PM