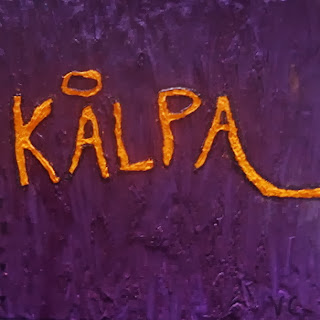 What they say:
"Hey there James, hope all is well in the stratosphere!
This one is for the Cosmic cats. I hope you have an antennae tweaked into the vibration of the Muse. me and my partner brought this album from the deepest parts of our Intellectual Emotional and Cosmic capacities. We know it isn't for everyone, but tireless we are in sending this vibration out because for a certain kind of wanderer, that connection is going to be made. maybe you are one of those and I really appreciate you taking sometime to open up. The songs are long but hopefully rewarding.
We wrote this whole album out in notation, no "jamming" moments... trying to keep the vibration from the Muse as pure as possible. Good luck to you and your pursuit either way.
Thank you, thank you, thank you again. Justus"

What I say; 'Kalpa' opens with 'Diamond Sigh', a track so grating, schizophrenic and unlistenable it made me want to fly to Canada to seek murderous and bloody revenge on the person / persons involved in created it. It's like an ice pick to the ears that immediately brings to mind the unnerving racket Yoko Ono makes whenever she opens her mouth. Mixing some of the worst elements of prog rock, experimental noise and computer generated effects, Valued Customer produces unbearable sounds that can be traced to causing epilepsy in dogs and small children. The rest, what I could bare sampling was an abomination to sound and art. "Kapla" which means success in Klingon, is a complete failure. Boldly going where no one would ever want to go. James Damion