Sacrilege - Thoughts are the Dreams till their Effects are Tried 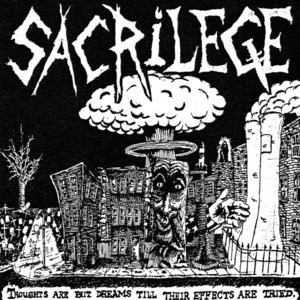 The latest entry in documenting some of the lesser celebrated Hardcore/Punk bands from
New York's now storied history comes to us from what has always been a reliable source of quality in
Freddy Alva and Wardance Records. Sacrilege, a short lived, mid level band whose activity took place during a time where
New York's Hardcore scene was going through a transitional phase. A time in which many of the old guard of '82 bands had either disbanded or had entered the realm of crossover. (A melding of Hardcore, Metal and Thrash)
A time that seemed like a holding pattern where the streets of the
Lower East Side and the Bowery were sort of tidying things up for the next wave of bands to arrive. It was post Rat Cage / Pre Revelation, so to say.

The short lived band notably featured former and future members of Agnostic Front,
Reagan Youth, Murphy's Law and Nausea. Relations that surely helped the band get on it's share of bills with such better known acts. The records A side features the bands 1985 nine song demo recorded at Don Fury's legendary Demo Demo Studio. While the B side features Bolt Studio demo recorded later in '85. When listened to in sequence the Don Fury sessions trump that of the Bolt session. Overall "Thoughts are the Dreams till their Effects are Tried" is a nice document of a time in New York Hardcore's history that is often overlooked and perfectly depicts a mid level band playing during a time of change and uncertainty in the NYHC scene.

The record includes liner notes from guitarist Victor Venom, bassist Adam Mucci and Wardance Records own Freddy Alva. Each painting an accurate picture of the bands history and what the NYHC scene was like at the time. (It was the best of times. It was the worst of times.) The lyrics, images and old show flyers really add to the overall story.
As I mentioned, I had never seen the band live but the"Halloween Monster Mash" show flyer was one of the countless gems that adorned my wall at the UNITE headquarters back in the late 80's.


Personally, I wasn't sure what to expect from this this. Having never heard their demos or seen them live. Sacrilege seemed like a band that just missed the boat, slipped through the cracks or maybe, just weren't that good to begin with. In the end, I'm glad I had the chance to find out for myself.
James Damion