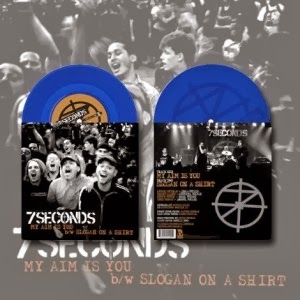 To be honest, it's been quite a long time since I gave any recording post 'Soulforce Revolution'
in close to ten years, if not more. Interesting, considering how important the band has been from the very earliest stages of my punk and hardcore existence.
My very first show at CBGB's was
7 Seconds. A night when me and my best friend Danny Doyle ventured down to the Bowery and didn't return until the next morning.
As the needle dropped on
'My Aim is True' I was immediately transformed into that fifteen year old kid who found his first
7 Seconds record in the back of a Queens, NY record store called "Numbers" and quickly feel in love with positive Hardcore. Inspiring anthems and pile on worthy choruses take my memories and love for this band from the rear view mirror to the present and the future. Just a great record in every sense.

'My Aim is You' and 'Slogan on a Shirt' the first songs from 7 Seconds in eight years.
The 7 inch also marks the bands debut on Rise Records and goes rather nicely with the bands just released re-issues. Thanks to the band for all the memories. Both old and new. James Damion