"Science Rules Everything Around Me" - A.K.A. Papa Reese's Birthday Show

As I parked the car and headed across the street to the Clash Bar. I immediately noticed  a small crowd of familiar faces. It had been a long time since I last walked through the doors of Clifton's favorite watering hole... and for the life of me, I can't think of one good reason why it's been so long. The easily accessible rock bar owned by former Let it Rock proprietor "BOB" has been a go to place for booze, rock n' roll and a laid back vibe that sets it apart from the handful of music related bars in the area. On this particular night we were all gathered to celebrate the birthday of our favorite Viking, Papa Reese. The Clash Bar was in such high spirits on this particular night that the gods, whoever they may be, had to look up to Harding Ave. for inspiration and instruction.

I made my way inside just in time for Those Mockingbirds. In truth, I might not have made the final push to get off my ass and go if it weren't for the message Adam Bird had sent me earlier in the day "James, be there if you can. Everyone will be amped with your presence." 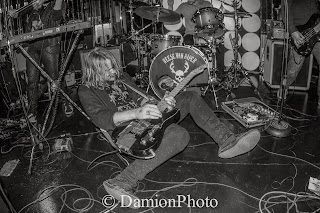 I've become somewhat of an introvert these last weeks and it's shit like this that help me want to fight my way out of whatever I'm going through.  I hadn't seen the band since the beginning of the year and to hear a mix of old favorites amongst songs from the yet to be titled upcoming album, including the single
'How to Rob a Bank'. In my history of show going it would seem that just about every band I've ever seen has a cover song they like to drag out. I've seen bands do this since day one and I'm all in for a good cover song to get the goosebumps bumpin'.
Those Mockingbirds rendition of Fleetwood Mac's "The Chain' is one for the ages. For me personally, it rivals that of Seaweed's version of 'Go Your Own Way'... and that says a fucking lot. One of the most remarkable elements of any TM set has always been the presence of Tory Anne Daines (Violinist / Keyboard). However, on this particular night, the level of confidence coming from her side of the stage cannot go without noting. She brings an extra element of sound to the band that helps to set them apart. It's good to see her basking in the glow.
Those Mockingbirds 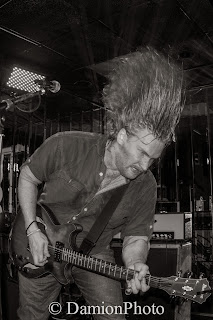 Birthday boy Reese had the whole place in the spirit. Making their Clash Bar appearance more than a show or a simple birthday bash.
Their set and the entire night took on the markings of a family reunion. I first met the band through the Tiny Giants Artist Collective and remember being introduced to their sound at the launching of of Lamplighter Magazine. Though it wasn't love at first site. The bands sound brought me back to the things I loved about soulful blues and whiskey soaked ballads. If memory serves, this was the first time seeing old friend and handsome guy Paul Beier (Pour the Pirate Sherry,
The Vapor Apes) on bass. The chemistry between Paul and Reese is instantly recognizable.
There was a lot of love for Reese and the band on this particular night. It was well earned, as far as I'm concerned. We all love the rock and live music. That much is a given. Seeing a band who puts their heart out on the stage while engaging everyone in the crowd just makes it all inclusive.
Reese Van Riper

Throughout their set Reese took every chance he could get to warn everyone that if they didn't stay long enough to see and support the band Science. There would be serious repercussions. Punishments that would include beatings and public scorn on any and all social media outlets. Not wanting to have my tires slashed and my camera sodomized.
I decided to stay put and see what all the hubbub was about. 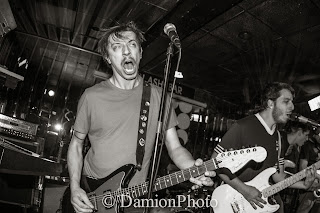 As the band set up I made the social rounds. Saying hello to some familiar faces while making friends with a few new ones. Before long Science had assembled and launched into their set. All the mouthwash Reese had been sharing about the greatness that is the band Science didn't even begin the describe the energy and electricity Science delivered.
I give major credit to Reese's threats for keeping me from sneaking away to my car and heading home. Comparing the bands manic stage energy to it's overall musicianship is like arguing the whole chicken or egg question. The bands set was amazing and the impact their performance had on me leaves me speechless.
Science

This was a show I really needed to be a part of. As much for myself and just feeling about life in general as it was to help celebrate a friends life and the music that's being generated in this area. I'm going to be look back on this one as one of thse special nights for some time. I may be fucking old, but I ain't dead yet. James Damion
Posted by James Damion at 2:51 PM