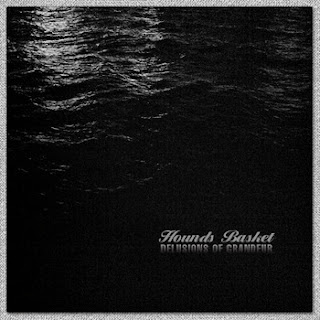 It's never a good sign when your half way into a records first song before you realize you're listening to a Doors cover. What's just as bad, if not worse, is finally realizing that it's actually not a cover. Brooklyn's Hounds Basket self described mix of alternative, grunge, stoner metal come together rather nicely.

This seven song EP opens with 'Melatonin' and 'Master Plan'. Two sludgy stoners that would best serve as the closers.
It's not until the cleverly titled 'She's a Nihilist' riffs kick in 'til the ears perk up and wake me from my slumber.
'Dazed and Amused'
and 'Delusions of Grandeur' follow with similar results. Excellent metal rippers that really highlight the bands ability and promise. Strangely though, 'it's When in Rome' the records closer that is by far the EP's strongest song. Though it shares the sludgy stoner influences of the opening tracks. It's mammoth sound and grinding power have an incredible effect on the ears. There's some serious Alice in Chains love going on here. Though I'm not sold on 'Delusions of Grandeur'. I'm glad I stayed long enough to here the entire package. I'm cautiously optimistic about the bands future. James Damion