An Interview with Andy Stern of Feral Babies

Tampa's Feral Babies first came onto my radar when my buddy Dave reviewed the bands demo back in September of 2011. After listening to the demo and the 7 inch that followed, it was safe to say that I was a fan. So when I heard they were hitting Brooklyn's
Stolen Sleeves Collective for an intimate show; I knew I couldn't miss the opportunity to catch them live. Prior to their set I spoke briefly with the bands guitarist Sulynn. About an hour later I was standing about six inches from the band as they played a rip your face off set to a collection of punks, nerds, geeks and hardcore kids. (Basically, the kind of people you'd want to fill a room with.) Although I really enjoyed listening to their tunes from the safety of my computer; seeing the band live and feeling that incredible energy was inspiring. As the tour wound down and the band headed back to the sun city; I got the opportunity to ask the bands drummer a few questions. Here's what transpired.  James Damion
(Interview; James Damion Photos; Nicole C. Kibert)

James: You were in bands prior to forming Feral Babies. Was the band born out of anything in particular or was it just a case of wanting to start something fresh?

Andy: The band started when a project that Justin and I were previously part of was coming to an end. We started writing songs in the style of the 80's hardcore punk that we've always loved. Knowing that we didn't want to do Feral Babies as a two piece, we immediately thought of Sulynn for guitar and Marc on bass. We were super stoked that they wanted to do it and had the time. All of us play in multiple bands at any given time. The idea of being stagnant musically drives us nuts.

Sulynn is an insanely good guitarist. Where did you find her? Has she received any offers to do her own version of Guitar Hero?

We "found" Sulynn playing in a band called Lights Out when Justin and I were playing in INJ/SYS. Her stage presence and playing was incredible so she was easily the first guitarist we thought of. As for her own guitar hero, no offers yet... hello Activision!

James: When you started the band did you have any lofty goals in mind? What was the game plan? 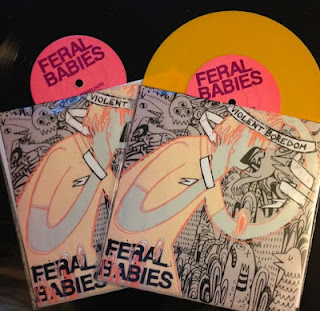 Andy: Early on the game plan was to not have Justin die of exhaustion. Talk about out of shape! After that we really just set out to start writing songs we liked and see what happened. We never expected the response that the band's gotten and certainly aren't complaining. We have songs for a split recorded and a handful of new ones for a full-length in the works. Other than that, we have no "5 year plan" etc.

James: You just got off of an East Coast tour. Was this your first excursion as a band?

Andy: Our first Feral Babies trip outside of Florida. Each of us has toured with other bands but crossing the Florida/Georgia border with the babies felt good. It was a long time coming.

James: What were some of the highlights and low lights?

Andy: Justin throwing up on himself all the way from Brooklyn to Richmond was probably a low light. Justin blaming dirty hippies for not washing their hands before preparing our food was a highlight. Oh and we also found out which states consider smoking Spice legal thanks to Marc's indulgences. Consider this a public apology to North Carolina for Marc's behavior.

What the hell is Spice?

You obviously live in a non-legal spice state. It's a synthetic form of pot that while getting you high, also can cause heart palpitations. Man did Marc love that stuff. Now we are trying to get him into "bath salts" since the Miami face eating thing. He isn't biting though.
Get it? biting? ugh.

James: You opened for OFF! What was that like? Did you get to mingle and such before or after the show?

Andy: Playing with OFF! was awesome. We are all big fans of the band and they put on a hell of a show. Keith Morris couldn't have been nicer. I went out drinking with the rest of the band after the show and can't say with any certainty but I think they were good dudes.

James: When your opening up for a big name band and you know that most of the people are there to see them; Is there anything you do a little differently to leave your mark?

Andy: I don't think it matters if we are opening for a big name band or headlining a house show, we always play with the same level of energy and engage the audience as much as possible. If we aren't having fun, can't expect anyone else too. 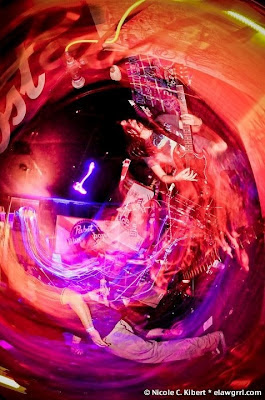 James: When I saw you perform in Brooklyn it was in a very tiny space, yet you were all moving around like kids on caffeine and candy bars. As a band do you prefer those tighter, more intimate spaces?

Andy: Smaller spaces make us realize how fat we are getting and motivate us to lose weight. We are very vain people. Sulynn always looks in shape though. That said, we prefer intimate shows to larger venues. It creates more of an opportunity to an opportunity to connect with the audience on a more personal level and enjoy the heckling THAT much more.

James: How would you describe the chemistry in the band? Which one of you is the creative genius in the group? Who's the malcontent?

Andy: None of us wears the creative genius hat. We have a vision for the sound we want and all write equally. I've never played in a band that writes songs so easily together. As for malcontent, we are all pains in the ass.... except Sulynn. When we returned from tour, we all liked each other a little less. That passed quickly though.

James: Being somewhat of an artistic head case myself. I found myself completely related to your song "Violent Boredom". Can you tell me how you go about maintaining your sanity when there's an inability to be creative?

Andy: Who says we maintain sanity?! We all have at least one other band at any given time, write our our music, and have various other hobbies. The idea of being stagnant creatively is unbearable. Yeah, Violent Boredom paints a very true picture of who we are.