Getting "Ugly" with the Screaming Females

Recently I had the honor of interviewing Screaming Females drummer Jarrett Dougherty. The band recently released their fifth album, 'Ugly' on Don Giovanni Records. The album, a product of mind-blowing rock, has received well deserved praise from fans and critics alike. It's clear to see how much they've grown over the past 7 years, and the progress they've made is inspiring for any DIY band. Every show I've been to is better then the last, the music more powerful, the crowd wilder. The intense energy they produce on stage is ignited through the audience in a way I have never experienced at any show. The bands record release show at Maxwells left me dancing until the sole of my boot tore off. But more importantly, the Screaming Females never fail to show how much they love what they do, and how eager they are to shout it out to the world.
Thanks to Jarrett for taking the time to thoughtfully answer my questions.
Jordann McAlinden


Jordann: What do you enjoy doing the most when you're not touring or working on your music?

Jarrett: I have a bunch of pursuits outside of Screaming Females.
I like to read. Currently I have been reading a lot of radical left political theory and history.
I'm almost finished with
Silvia Federici's fascinating book 'Caliban and the Witch.' Lately I've began trying to learn german. I currently only speak english and would rather not die monolingual. I also like sewing, cooking, baking, yoga, and small home construction projects.

Jordann: Screaming Females is known for the DIY style. Have there been any sacrifices you needed to make, for the sake of the band?

Jarrett:  I'm not sure what you exactly mean when you say sacrifices. You can only lead one life and that necessarily means that you have to forgo possible life paths. I prefer to think of life in a constructive sense. Because of this outlook I tend to see the amazing things I've been able to do in the past 7 years with Screaming Females because of our commitment to each other and this project.


Jordann: Sorry to hear some shows had to get cancelled this month. Has Marissa's episode with mono made her think twice about mic swallowing?

Jarrett: I think she might finally cave in and buy her own microphone to use on tour rather than whatever happens to be where we are playing.

Jordann: Not everyone has a sound that turns the mountains into sand. What comes first, the lyrics or the music?

Jarrett: The music always comes first. The three of us get in a room together and just start playing until something cool happens. Then we work on that rough part until it turns into something we like.
Marissa writes all the lyrics and they usually don't appear until the instrumentation is pretty much finished.

Jordann: How would you say Ugly differs from your past albums?

Jarrett: It is the 5th rather than the 4th or 3rd or 2nd or 1st. We recorded Ugly outside of NJ which was a first. It cost a lot more money and we put a lot more time into refining the songs. We were able to have a level of self-criticism that I feel can only come with a longstanding relationship. Because of that the songs were the absolute best they could be by the time we got to the studio.

Jordann: Do you think you have a sense of humor in your songs that you don’t necessarily get credit for?

Jarrett: I think we bring to Screaming Females a wide range of expressions. We are thoughtful people. We discuss what the band means to us individually all the time. At the same time we also like to laugh. I feel like we have an exaggerated sense of humor. We play music because it is fun but also, maybe more importantly, because it is fulfilling. I hope that comes across.

Jordann:I feel like this album really exemplifies the growth you guys have had within the last few years. What image do you think your music conveys?

Jarrett: I hope that both musically and the way in which our band operates shows that artists don't all have to take the same path. Diversity is good for society and it is good for the arts.

Jordann: I really admire the artwork for Ugly. Any symbolic/deeper meaning to the album’s artwork? 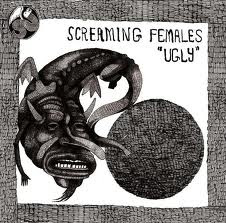 Jarrett: Marissa had been starting to draw those monstrous creatures before we came up with the
album title but once we decided on 'Ugly' she saw those figures as representing the concept well. As the art started coming together I think Marissa realized there were some similarities going on to Nick Blinko and Albrecht Durer. Both of those artists, though separated by hundreds of years, visually dealt with demons and Hell. I think a lot of that imagery represents the struggles within oneself and also one's struggle with "evil" forces in the world.

Jordann: Have any advice for fellow DIY bands?

Jarrett: Don't drink too much booze. Drink a lot of water. Eat fresh fruits and vegetables.
Always remember why you started playing music.

Jordann: What legacy do you hope to leave behind?

Jarrett:  Legacy is a strong word. I hope that someday people look at Screaming Females and are amazing at the quantity of quality work we managed to produce over many years. And that we created those albums and played those shows our own way. Most relationships don't last very long, especially band relationships.