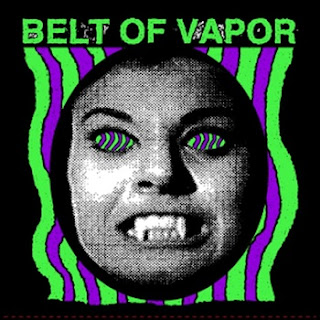 Spokane Washington's three piece Belt of Vapor have been playing together for eight years with two self released full lengths (Playing God and     The Complex Mating Game of Giants) and a five song self-titled live EP. Prior to receiving this I was completely unaware of the bands existence . Thanks to Jason at
"Whoa Boat Records" I now have yet another band to fully investigate and celebrate.

The opening track and records title "Buck" is a mid paced stunner with it's screamed anthemic vocals, spiraling guitar and crashing drums.
I felt an immediate Rye Coalition vibe on this one. One can't help but give in to the spirit and venom of the tune. Genius/Failure attacks the senses like a pitbull out for vengeance with it's Hard Rock bombast, swirling angular guitar and stand out bass lines. The track opens at a frantic pace that begins to spiral into a slow torturous descent into hellish territories
(I mean that in the highest form of praise) a little less than its half way point.

The 7 inch is available on green (100 copies) and black (200 copies) vinyl.
What happens after that is unknown. I'd highly suggest you get your hands on it while you can. Belt of Vapor is a band that definitely warrants further investigation.
I can't wait to hear more.  James Damion